As we were in Glasgow with the Scots Independent newspaper for SNP conference, we decided to stay an extra day and do some culture. I had heard a review of this exhibition on the radio. While not a fan of traipsing around art galleries I felt this would be worth taking a look at. A lot of effort had been put into pulling the artwork together from artists from all sides and sections of the war. Once over these works would all go back where they had come from, possibly even back in storage.

I started by saying that I would be doing a write up for our newspaper that would be printed in time for the Christmas/New Year break and might bring some visitors. I was upfront and asked if a photo or two could be taken. The young lad went to ask the boss and came back saying no. We expected this. However we did not expect the boss to come out herself. I said I appreciated the rule about photos as these were personal original artworks. But would it be okay to take a photo of their poster to promote. This was fine. 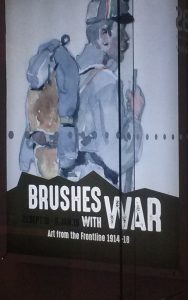 She went on to ask about the newspaper and was pleased that we would be doing a review. Chatted about the exhibition and said it was a pity there was a charge as it probably put people off. At £7 or £5 concession we thought that was quite reasonable but I suppose when you are used to getting into the Kelvingrove Museum for free whenever you want it may appear steep. We thought this would be the end of the conversation but no. She wanted to know about how the SNP conference had gone. Was Nicola’s speech brilliant? I stood there pinching myself. Here was someone working in Glasgow culture and openly talking about the SNP! My Glasgow has changed right enough.

Right, back to the exhibition. The artworks are grouped in themes. Periods of the war. Infantry. Navy. Airforce. Field hospital to name a few. There are all types of work. Everything from small pen sketches on pocket size notebooks to full size works in watercolour and oils done away from the action. Some humorous sketches, I particularly remember some from the French taking the mick out of senior officers. When we first walked in we thought it was just the big room we saw ahead of us. Not being familiar with the Museums nooks and crannies we did not realise till working our way round that there were rooms off this main room which housed many more art works. Above each group of works there were lines of poetry, pertinent to the subject, from pieces by the war poets. Such was the variety of subject that I found myself enjoying it more than I thought and nowhere near as grim as I imagined. I did feel a tug though when I got to Percy Smith’s Death Etchings. His pieces summed up what I feel about that war.

We spent a fair bit of time going round this exhibition, so many powerful pieces to reflect on. Despite there being a charge I would highly recommend it. In this 100th year since the end of this war it is fitting that these works be seen. A true record of life for the people living and dying during this period. Goodness only knows if there will be another time that so many personal accounts will be seen in one place again.