Being my turn this week I thought what can I write about? Schools on holiday, Parliaments in recess. Just leaves local election campaigns and believe me you don’t want me to go there! Then I looked at today’s newspaper. Another cash cow in the public system, halted by the SNP and wanted to be reinstated by a professional body. I had absolutely no idea that health service consultant doctors were being given a performance bonus of up to £75,000 per year. I am not a total innocent in the health care world. In a previous life I was a nurse. I sort of drifted into END_OF_DOCUMENT_TOKEN_TO_BE_REPLACED

A leading light of a pro-European Tory Group described the rush to implement Brexit, whilst casting aside the implications of Scotland and Northern Ireland voting to remain, as ‘the English majoritarian mindset’. Herein lies Theresa May’s greatest problem. To satisfy the anti-EU bloc, she must be seen to drive forward the Brexit agenda and in doing so, trammel the concerns of Remainers in any part of the UK but especially the Celtic fringe, if she, as a former Remainer, is to retain power.   In a move that was lifted from the Thatcher playbook, the Prime Minister declared: ‘Now is not the time’ and with END_OF_DOCUMENT_TOKEN_TO_BE_REPLACED 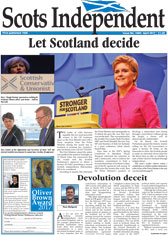