I joined because I was sure that we could run Scotland from up here a lot better that they could from down there.  My view then was that we produced more food than we could eat, and more drink that we could drink, although we have always had those who by their actions tried to disprove the latter.  We had an abundance of energy with a thousand years of coal , water – a scarce commodity, and a skilled inventive people. 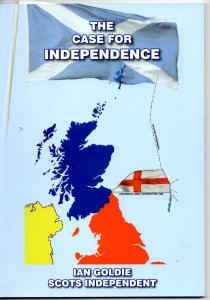 We knew that the mismanagement of Scotland by Westminster and Whitehall meant that we would need a few years to put things right.  Independence would not mean instant wealth and good health  but by spending Scotland’s money on Scotland we could have had it sorted in a few years.

Then in the early Seventies oil was discovered, but “not in much quantity” we were told.  This bonus would enable us to speed up the process of restoring Scotland but our thoughts were pooh-poohed by Westminster.   Hardly any,  they said, don’t be daft.  The SNP researcher Donald Bain, (later one of the Flag’s earlier contributors), made some rough estimates on the sketchy information available, and was laughed out of court for suggesting we could benefit to the tune of £800 million a year.

Thirty years later, the Cabinet papers of that period were released, quietly, and we discovered that Donald was wrong – there was not £800 million a year – there were billions upon billions.  They hid this by creating a Continental Shelf and allocating all revenues under that heading, effectively concealing it from the electorate.

The main Cabinet paper was known as the McCrone Report and included the statement : “for the first time since the Act of Union was passed it can now be credibly argued that Scotland’s economic interest lies in its repeal”.  In the papers there were proposals to change the sea boundaries out  to the Norwegian line and to create a Shetland box, so that if Scotland became independent Shetland would stay with the UK.   This went on under Tory and Labour governments.  In any event the answer to the above was just to hide the report for 30 years, when it would be someone else’s problem.

In 1999 just before the Scottish Parliament was elected Westminster slipped through  the Scottish Adjacent Waters Boundaries Order , which altered the Continental Shelf(Jurisdiction)  Order  1968 , and transferred 6000 square miles of  Scottish sea  to England.  This included 6 oilfields –     Fulmar, Auk, Clyde, Janice, Angus and Fife..  According to the Herald  this Order “was passed by the House of Lords and the Committee on Delegated Legislation in 23rd March 1999 but was not openly debated in the Commons”.

And we still do not know how the profligate Treasury managed to squander billion of Scottish money.

Having ripped us off in the days when oil prices were high they now jeer at an “independent” Scotland who will be bankrupted by these prices.  Word to the wise:  Westminster and Whitehall are terrified at the prospect of losing the oil money, because they would be insolvent.  We do not have any of it and never had.