Le première of the First Snow

It takes a little while to figure out why this drama is so titled. But then the main character, Isabelle, explains that the day after Quebec’s second referendum, which Federalists narrowly won, the ‘first snow’ of Winter landed on the deserted streets of Montreal. Fallout from the nuclear shock of a second defeat in fifteen years? Or a telling aide-memoire that you only get two chances in life. Make a mistake once but make it again and you’re a goner. 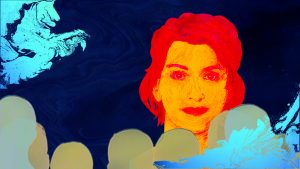 So this is a dramatic piece co-written by Davey Anderson (yes, of City Limits fame), Phillippe Ducros and Linda McLean. A joint effort between the National Theatre of Scotland and Théâtre PÀP (Petit à Petit) and Hôtel-Motel. [Apologies to our webmaster, Tricia, but there are lots of graves, acutes and the odd â in this review].

First off, the acting troupe is first class. ‘Uncle Harry’ Standjofski gets a particular mention as the token ‘Federalist/Unionist’ in the drama. The only voice challenging the pro-sovereignty/independence leanings of the rest of the cast, he has a thankless task but rises to the occasion, maybe even the bait, extremely well.

Fletcher Mathers as the Woman for Independence partners Isabelle Vincent in a friendship across the ocean, bonded by the 2014 Yes campaign. She has an authoritative performance, just like her more recognisable voiceover used on the Passenger Information System found on all ScotRail trains (oui, c’est vrai).

Before I go forward, I should declare an interest. I search for the metaphor in everything. First Snow does not disappoint. An early soliloquy by François Bernier dwells on the corbie or corbeau, just as Liz Lochhead had written in Mary Queen of Scots Got Her Head Chopped Off. But it won’t stick in your craw for long (couldn’t help to use a pun).

More obvious is the focus on family. The gathering of family and friends at Isabelle’s house in expectation of a big announcement draws parallels to the concept of family as country. Even the favourite family dish, roast beef spaghetti, implies a mixing of ethnicities and cultures. The comparison between Scotland and Quebec is intended. Quebec has had two independence referendums – 1980 and 1995 – both resulted in a No vote, the latter of a slimmer majority than even the EU referendum here in 2016. Still, the desolation which a second defeat had on the psyche of Quebec is clear. Perhaps a signal to Scotland to think long and hard about when to go for our second referendum?

Memorable scenes include the cast doing a Slosh to Yellow Submarine. 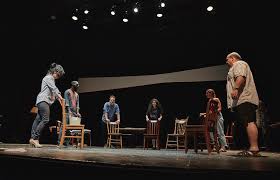 The youngest family member is Zoé Tremblay and her boyfriend Thierry Mabonga. Now you could be forgiven for assuming the young sweethearts are Quebecois through and through but you would be wrong. Thierry is as Glaswegian as Shellsuit Bob. A refugee from Rwanda through the French-speaking Democratic Republic of Congo, he arrives in Scotland as child and quickly picks up the lingo.

He has one of the most challenging perspectives on this traditional Scots-Quebecois auld friends act. When asked why he doesn’t speak French before English to Zoé, he gives her a lesson in post-colonial attitudes where in fact his first language is Lingala, of which clearly she had no knowledge.

More fruitful historical comparisons include a reference to the values and principles that shape who the Quebecois are. Citing the Declaration of Independence of the Patriots sounds like a link to the war of American independence but actually refers to the Patriotes Rebellion of 1837-39 when Lower Canada (the former New France), attempted UDI as a republic from the British Empire.

Just as in the Arbroath Declaration of Independence and the more recent Claim of Right, these constitutional instruments serve to flesh out the identity of a people and what they stand for. Something which the rest of Canada, and for that matter the rest the UK, is lacking.