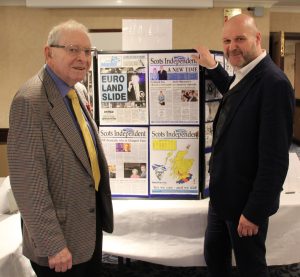 This week the Scots Independent newspaper had its 90th Birthday;  there was a well attended lunch in the Salutation Hotel on Saturday 5th November.

There were stunning displays of the SI through the years in one part of the room, and a brilliant slide show of various events and characters past and present, in the SNP and the SI – I found it overwhelming.

Our guest of honour, First Minister Nicola Sturgeon, PC, MSP, presented commemorative plaques to long term SI supporters, Denholm Christie, current SI Chairman, Ken Fee, SI editor for almost 20 years, myself, Editor for three months which stretched to 10 years and three months, and then one that warmed the cockles of my heart, Tom Preston, who joined the SNP in 1947, and was the SI  Business Manager for well over 50 years.  He was always a background figure who watched the finances like  a hawk.

The DVD slideshow which ran throughout the lunch  and the exhibition was the work of our current Business Manager, Ian Hamilton and his wife Margaret, ably supported by Ian’s son Stewart and his wife Carrie.  A very impressive show.

Hopefully we may have the DVD available– it was some show!

And where stands Scotland now?

Today I was recalling Aneurin Bevan, founder of the National Health Service;  one of his most famous quotes is “We live on an island founded mainly on coal and surrounded by fish;  only an organizing genius could produce a shortage of coal and fish  at the same time”.

Well that was then, just after the Second World War, so what has gone wrong? The Westminster Government got into trouble with the Gnomes of Zurich for living beyond its means.  The SNP began to look attractive to Scots in the late Fifties/early Sixties, but always we got put down with the “Too wee, too poor, too weak” cry from Westminster. This was before Britain joined the EEC.

The first letter I ever wrote to a newspaper, the Scotsman, a different newspaper in those days, started off “Dear Mr English Taxpayer……” and went on to grovelingly thank him for his generous largesse allowing me to adopt a comfortable life on the back of this.  The newspaper published this, in a box, in the middle of their Letters Page.  I am sure that I will have a copy of this somewhere in my loft.

Winnie Ewing won the Hamilton by election in November 1967, a shock to the establishment;  we heard rumours of oil being discovered, but were assured by Whitehall that it was negligible.  In any event, I had joined the SNP in 1966 because I believed we could run Scotland from up here a lot better than they could from down there, and if there was oil then we could put things right quicker.  However, the oil money was sucked into a new region called the Continental Shelf, and vanished without trace.  Then 30 years after this,   Cabinet papers, the McCrone Report,  were published showing that the SNP figure of £800 million a year was wrong – there were billions.  And in the papers there were plans to redraw the sea boundaries, a Shetland Box, because Shetland did not want devolution, and a recasting of the English /Scottish line at Berwick upon Tweed. The Cabinet baulked at this, but slid  the English/Scottish part quietly through the House of Lords on 23 March 1999; the devolved Scottish Parliament was elected in April that year. 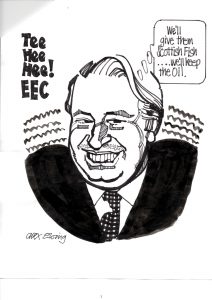 During this period, Tory Prime Minister Ted Heath took us into the Common Market, no referendum, but blithely handing over control of the seas  and Scotland’s fishing stocks as of “no consequence” this was 1973.  In 1975, Harold Wilson, then Prime Minister called a referendum as to whether we stayed in or out. The SNP said “Not on any one else’s terms”.  We lost.

In 1979 there was another Referendum and while Yes won the day, the imposition of a 40% rule meant we lost’  this rule was put in by George Cunningham, a Scot, but a Labour MP for Islington. This clause meant that a dead voter would be counted as No if the name was still on the voters’roll

Prime Minster James Callaghan would not impose a three line Whip on Labour and they lost a vote of confidence.  We lost 9 of our 11 MPs in the 1979 election.

This brought in Margaret Thatcher, the Poll tax, the Miner’s strike, and the deadlock was only broken when Tony Blair came to power in 1997.

We then had another Referendum  and Scotland voted for devolution.

Since then we have had three Scottish Parliaments run by the SNP,

a Referendum on Independence won by the NO side  using false promises, the first action was to make every Scottish MP a  second class one. Then a Referendum on the EU which takes Scotland out although we voted to stay, and a Conservative government in London determined to put through   a UKIP policy which will do untold damage to Scotland. In 2015, the SNP won 56 of the 59 Westminster parliamentary seats

The point is that all this happened on Britain’s watch, my reason from 1966 has not changed, and they cannot cope with a changing situation.

As the confusion of what Brexit actually means fails to be cleared, it seems to me that now, more than ever, we have to stop Scotland being mismanaged by a bunch of hard right Tories, who know not what they do and take our destiny into Scottish hands.

Independence – nothing less. The Union has had its chances;

Right – that’s my rant over.

Buckingham Palace is going to require a massive refurbishment, £369 million I understand, which will be paid by her smiling taxpayers. With serious overcrowding in London and the Home Counties a refurbishment of the 755 rooms, or thereabouts would make them available for rent.  I remember the old ditty “How many more in 1964 for the English Royal Family – the Queen she had four, with expenses for a score, of the English Royal Family”.  Surely she does not have that many relatives needing housed, but I think she has a few palaces/castles.

As the British Empire shrinks, we still have MBEs, OBEs and as many other BEs as you like; one might expect that these medals would be  shrunk to the size of a 5p piece, or just to the ribbon by this time.

There seems to be no hard news on the aircraft which will be required for the two new £6 billion aircraft carriers, but I think we can be reasonably assured they will be built by the US. One does not need a long memory to recall the replacements for the Nimrods being cut to pieces on the runways by Defence Secretary Liam Fox.

Perhaps that is how they get the fourth largest budget- build them at vast expense then scrap them.  Cui bono?  America ?

However, although  Britain does boast of the fourth largest Defence Budget in the Western World, there does not appear to be enough money to build the new frigates required, whose number has been whittled down.   Also as Army Navy and Airforce bases are being closed down are we approaching the situation Ireland was put in after 1926?  Westminster stripped as much as they could from Ireland – is Scotland the next project?

We will gladly hand over Trident and leave Mrs May to handle Donald Trump, the man with the key, as long as he takes them off our doorstep.