By: Tricia Wallace
In: Margaret Hamilton

Ian and I have been out of the campaign loop the past few weeks. We have done what we can but many other things have been happening to take up our time. Changed days from when we were at the centre of everything!

We are literally, as I write this, just back from a few days in Dublin. We planned this visit a year ago as we were alerted to the celebrations that were taking part to commemorate the Easter Rising of 1916. We naturally assumed that the real celebrations were to be on the exact date as this fell on the same Sunday as in 1916.

We were somewhat miffed to see that a very state affair took place 4 weeks earlier. The receptionist at our hotel thought it was because it was a holiday weekend (the movable Easter feast!). 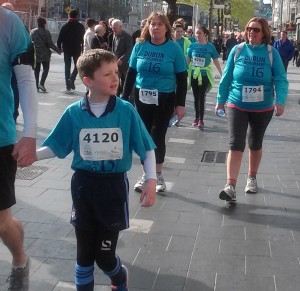 We went along to the reading of the proclamation on the Sunday morning. Runners started gathering around 9.30 am. Turns out more than 4,000 had run a race around some of the historic points of the city. After the very well produced re-enactment the guest speaker was announced, Martin McGuinness. Huge support when he reminded people that Ireland was not truly Independent until all 32 regions were free.  Ah, penny beginning to drop.

Went for a wee walk and a sandwich to keep us going on the march. On the way back, checked with a Garda that the walk to the cemetery was starting from O’Connell Street, as Martin McGuinness had mentioned an event elsewhere. She said she thought so but there were many events happening throughout the city. Right enough, all morning a guy had been trying to tout tickets to the Croke Park event where the Taoiseach was present. Didn’t seem to be getting any takers.

Anyway, we had a grand time. This was a peoples rally. There were speeches from historians and people in the arts. There was a concert by Damien Dempsey and Donal Lunny. The National anthem was sung with gusto many times. Somehow the bands, flute, marching, pipes all got into position and the people began to march. We fell in behind the James Connelly Society from Edinburgh. We chatted at the end to bands from the west of Scotland who had participated.

Next day we got the 2 main Irish papers. One covered it better than the other but it was still a poor effort. Family descendents of one of the soldiers in the 1916 Rising said they had chosen this event to go to because it was a peoples event. There was no pomp, ceremony, hierarchy. Everyone was equal and everyone was included. But no coverage by the press. No mention on the t.v. (the channels we could find).

Okay, this was Sinn Fein’s part of the day. The march to the cemetery was not theirs, but still the establishment press chose not to show the peoples remembrance. Seems it will forever be the case for those who rock the boat and refuse to follow the centre line.

We spoke to many people over the 4 full days we were there and all said how close we had come in the referendum and that they are watching us. The election next week is not a referendum but if people continue to vote for the party that seems to be the only one able to deliver improvements for the people of Scotland, we will be being cheered on by many people all over the world. Gaining independence is not a one off event. It is a continuous movement, an ebbing and flowing tide, that will one day carry us over the thresh hold that will make us a member of the Independent Countries’ Club. It’s not a perfect club but is has some grand company and many common aims. We could do much worse than aim to be a member.