I was reading in the Herald of Tuesday this week that they foresee a constitutional crisis if John Swinney does not sign up to the fiscal framework.  How perceptive of the Herald; there has been a constitutional crisis since May 2011, or more  probably since May 2007 when a sharp eyed nationalist counting agent, now the MSP for Skye,Lochaber and Badenoch, Dave Thompson, queried the Returning Officer’s declaration on the Regional Vote.  This initially showed no seats for the SNP; after checking the figures, two seats were allocated to the SNP.  This made the SNP the largest party in the Scottish Parliament, and Alex Salmond became First Minister.  Incidentally, Gordon Brown, Labour Prime Minister, attempted to get the Leader of the Labour Party in Scotland Jack McConnell, to do a deal with the Tories to prevent this happening.  Mr McConnell had enough political savvy to give this a body swerve.

The nub of the matter is the replacement of the Barnett block grant.  As more of Scotland’s money is claimed directly from the taxpayer, the Barnett block grant will be reduced by the same amount.  This seems eminently fair, at first glance, but then many more factors come into play.  To paraphrase, if you shake hands with the Treasury, count your fingers.  This proposal was initially specified by the Smith Commission set up after the Referendum to implement the notorious Vow.  I use the term notorious as in fact there was no Vow, just a front page by a Labour supporting newspaper, hastily agreed by David Cameron, Nick Clegg and Ed Miliband;  it was also vociferously supported from the sidelines by Gordon Brown..

The report of the Smith Commission, which consisted of two Labour, two Tory, two Liberal and two SNP was passed by a majority vote, ie 3 to 1 against the SNP.

This report was watered down and presented as the Scotland Bill.  When the Bill was given its first reading in the House of Commons the session was sparsely attended;  a series of amendments were put down by the SNP’s 56 MPs .  As the division bell rang, the lobby was inundated by Unionist MPs, who voted down every amendment.  As far as I can know, the House of Lords is not happy with the treatment meted out to the Bill – now there’s a turn up for the books.

The sticking point is the phrase “No detriment”.  The Smith Commission was very specific, the adjustment to the block grant was to create no detriment to London or Edinburgh, in other words the effect on both Parliaments would be equal.  In an evermore complicated economic situation a lot of goodwill, and shrewdness is required.   The Treasury wants one method, which would almost inevitably take billions out of the Scottish Budget, and John Swinney and his team favour a fairer method for Scotland.  This week the Treasury made a fresh offer but this did not come near. The mathematics are fiendishly complicated.

The Scottish Government is being pressed into signing up to a faulty no detriment version which will work against Scotland;  John Swinney is determined not to sign up to any agreement which will disadvantage Scotland.  His stance is backed by Professor Anton Muscatelli, Principal of Glasgow University, Professor David Bell of Stirling University, economist and statistician Jim Cuthbert, writing in the January issue of the Scots Independent, Professor John McLaren of Glasgow University, no friend of the SNP and Professor Gerald Holtham.

There will be screams of betrayal from the Unionist camp, but I trust Finance Minister John Swinney to make the best deal for Scotland.

Remember the shameful case of Scotland’s oil, the current state of which is getting bad headlines;  when it first registered in the early Seventies, SNP Research Officer Donald Bain made a rough estimate that there could be £800 million a year available.  This was scorned in a derisory fashion by the Treasury, hardly any there, nothing significant.  Then a new region was set up, the Continental Self, and oil disappeared from human ken.  A few years back the McCrone Report surfaced, Cabinet papers released under the 30 year rule (I had a mistype there, put in tear instead of yearJ appropriate). This showed that £ billions were hidden, and Treasury mandarins even attempted to redraw the boundaries for Scotland.  In the last few days I have read the sum of three hundred thousand million pounds of oil revenue but I have no way of knowing the provenance of that figure.  What is more important is where did it go?

All that found money, squandered by Westminster and the United Kingdom in a parlous state, trying to recoup the vast wealth accumulated by tax dodgers and crooked banks from the poor and dispossessed.

No detriment – no trust.

Another year another referendum 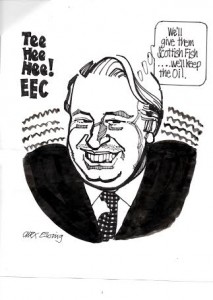 Along with the no detriment, most of the media seems to be about Brexit and what opinion polls are saying.  Mr Cameron is frantically trying to wring some concessions from other nations that he can present as victories to an aggressive right wing press and Tory Party.  He is not making any progress with either.  It seems to me that his referendum promise was made as he calculated that he would be in a coalition with the Liberals – let’s not use the word Democrats, and their conditions for coalition would include no British exit from Europe.  That plan failed as he got an overall majority, something any party would rejoice in, but he has no scapegoat, so has to fulfil a manifesto commitment.  Tough for a Tory.

He’s made his bed but unfortunately the SNP is also forced to lie on it, and it is uncomfortable.  Originally, the SNP was in favour of closer co-operation with Europe as a means to a more stable future.  This changed when Edward Heath took the UK in, without a referendum, sacrificing Scotland’s fishing industry, unnecessarily, as it turned out. I do not know if it was in the Tories’ manifesto, but a referendum was not in the British tradition.

When Labour came to power in 1974, Harold Wilson did have a manifesto commitment about the EEC, as it was in those days, asking if the people wanted to remain within, in June 1975.   The SNP campaigned for a No, with the slogan “Not on anyone else’s terms.”  Scotland voted Yes, with the exception of Shetland and the Western Isles.  I remember being on a platform at a hall in Edinburgh, speaking for No, and on the same side as a gentlemanly elderly Tory  – long before the days of Thatcher’s toxicity.

The Liberal made an impassioned plea; people in Europe got longer holidays with better weather, and yes he did use that expression!  The Labour man, well it was his government’s proposal, said that in France the farmers blocked the roads when they were unhappy about agricultural subsidies, letting me claim that we would be allowed to riot in the streets!

At the SNP Conference in Edinburgh in 1978 I narrowly lost a motion to oppose membership, so I had form.  My contention was that I could see no sense in seeking independence from one remote foreign capital only to meekly surrender it to an even remoter foreign capital.

Anyway, at an Inverness Conference, 1981, I think, the SNP decided to change its mind on Europe, as we wished to challenge the “lonely isolated” tag that our opponents were using on independence.  People credited that to Jim Sillars, but those with better memories say Gordon Wilson.  In our house we had a heated argument with my youngest son calling me an Albanian;  my wife defused that by saying “I thought you came from Dundee!” (We all did). Anyway my card was not taken at Conference, and the SNP supported membership.

As to why I changed my mind?  When discussing the matter with the late Jimmy Halliday and making the point about the loss of independence (as yet not attained) he said: “Scotland will have exactly the same amount of independence as every other country in that organisation”.  There was also the likelihood of a wider but shallower Europe.  Game set and match to my political role model!

History lecture over, how do we in the SNP ride the two horses, Yes for Independence, and No to exit Europe?   Well, despite all the hype and hoohah, Europe is secondary.  Just think, we are seeing thousands, millions really, of refugees trying to enter Europe in search of sanctuary, a complex war in the Middle East, Russian aggression in the Ukraine and the Baltic, and an attack on the poor and dispossessed in the UK.  The main driver of Brexit is a greedy right wing narrow minded movement which is dominated by England.  We can only influence the consequences by Scottish Independence.  We see now how any improvements for Scotland are struck down by the Tory majority.  We do not want to be in any shared campaign, the lines are too blurred.

Remember, when the Liberals went into coalition with the Tories they were slaughtered at the next election.  When Labour stood shoulder to shoulder with the Tories in the Referendum they suffered the same fate. Let’s not be tempted to commit suicide.

The Tory approach to Europe is simple;  they have never reconciled themselves to not running it, as they believe this is their divine right.  There was a half hearted attempt to have Tony Blair become the top dog in Europe, but the biggest half ie all the other countries did not agree, so that dog was put down. (I know Tony Blair was not a Tory but they are all brothers under the skin).

It is my belief that we should not become confused about a divisive issue that may not even arise;  if there is a referendum just after the Scottish Election then our work force will be weary and not inclined to campaign vigorously.  We will not be enthusiastic, and I am not sure if support for the EU in Scotland is as popular as the polls make out; further if Scotland does vote to leave then it puts us on the back foot, the last thing we need at this juncture.  I would hope that we run a minimal campaign, clearly stating our aims.  Whether we remain in Europe or not, the decision must be made by Scotland.

And as I write, I see Prime Minister David Cameron stating that he had a deal on Europe – no details on the Internet yet!

Last week we celebrated the Bard’s birthday; as a corollary I also watched a Liberal Party Political Broadcast by Liberal Willie Rennie.

After seeing all the motherhood and apple pie, for some reason I thought “Holy Willie’s Prayer

This very day my wife and I received a patronising letter from the Liberal candidate advising me what to do if our street needs gritted – as we have lived here for over 40 years I think that we might have worked that out – no research done. Also while piously claiming to keep the NHS out of politics, he manages to get at the SNP government due to health appointments.  I have not had any problems with GP appointments although I have had some health problems at the age of 81, but not with the treatment.

The expression Liberal principle is an oxymoron