By: Admin
With: 3 Comments 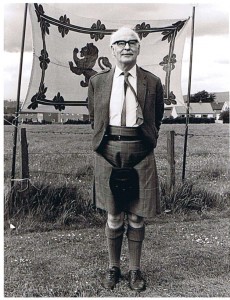 The late Oliver Brown brought wit, scholarship, passion, ribaldry and the most uncringing spirit to the cause of Nationalism. Readers of the Scots Independent recall his inimitable column “Oliver” which enlivened this newspaper just as its author enlivened so many public meetings.

Oliver Brown was a great journalist and the least provincial of men. His Scotland stood an equal among nations, neither vainglorious or servile.

He was the first Scottish National Party candidate to save his deposit in a Parliamentary election. For many years, alone, he ran a weekly Saturday night open-air meeting at West Campbell Street, Glasgow.

The Scots Independent, sadly aware of what we all lost with Oliver’s untimely death and sadly aware of how much in Scottish life today is made up of empty boasts and provincial pettiness, decided to dedicate an annual award to his memory.

Since 1983 the paper has awarded the “Oliver Brown Award” to a journalist, author, critic, illustrator, radio or television performer who, in the opinion of the judges, has done most in the preceding year to advance the cause of Scotland’s self respect. The award is an engraved decanter and a cheque for £100 for the recipient to spend on the whisky of his choice to fill it. The presentation of the award takes place every year at the Annual Scots Independent Lunch which is held in the Salutation Hotel, Perth.