Commentators North and South of the border are, grudgingly or not, acceding to, even applauding, Nicola Sturgeon as the stand-out Leader (again), of the 2017 General Election.  Launching the SNP’s 2017 general election manifesto in Perth, Nicola Sturgeon outlined the key policies at the heart of the document. The manifesto includes commitments to:

This last point is what many the independence movement will regard as a touchstone in the campaign. Frustrated by the Tories using the General Election on a single slogan of stopping #indyref2 whilst offering no policy platform of their own, triple-locking the second independence referendum will be the weapon to storm the Westminster defences.

Speaking as the manifesto was launched, Nicola Sturgeon said: 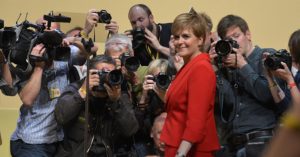 “This manifesto sets out a plan to end Tory cuts, protect Scottish jobs, and strengthen Scotland’s hand.  “It is a manifesto with fairness and opportunity at its heart – a manifesto for a country that is welcoming and outward-looking. Now, more than ever, it is vital to have strong SNP voices standing up for Scotland. In this election, let us make sure we strengthen Scotland’s hand, not Theresa May’s. Otherwise, much of what we cherish and value will be under threat.”

In a bold move that will take Unionist parties by surprise, the SNP Leader has offered a public investment plan which will lessen the impact of tackling the deficit on the poorest of society and contribute to more inclusive growth. Based on this alone, Angus Robertson should be the Chancellor of the Exchequer in a progressive coalition!

Nicola went on to say: “SNP MPs will also back fair tax. The difference between the SNP and the Tories is this – the Tories’ plans will give tax cuts to the wealthiest while pushing more hard-working people and families into poverty. We will take a different approach to public sector pay. The 1% pay cap was designed to protect jobs at a time of spending cuts imposed by Westminster. And at a time of rising inflation, it is becoming increasingly unsustainable. So for next year and in future years, we will not assume a 1% cap.” Welcome news to many in the public sector but also sending a message to employers in other sectors: you can’t expect more from your workers whist devaluing their wages in real terms.

Lastly, the First Minister focused on how jobs and the economy are interlinked to the Brexit impact and central to the SNP’s manifesto. Recognising what the Tories have failed to: the European Single Market, already the world’s biggest, represents a massive opportunity, a huge potential economic prize for Scotland.  She said: “But Brexit – and especially an extreme Brexit – puts all of that at risk. And that is why I believe so strongly that at the end of the Brexit process – not now, but when the final terms of the deal are known – Scotland must have a choice about our future; a choice between following the UK down the Brexit path or becoming an independent country within the EU. There is too much at stake for Brexit simply to be imposed on Scotland, no matter how damaging it turns out to be. Our future must be decided by us, not for us.”

Although I wasn’t at the Manifesto launch, I can just about hear the cheering raising the rafters at this point in Perth Concert Hall.

Nicola Sturgeon ended her address to the assembled with her plea to the Scottish people: “So my message to all voters in Scotland is this: whether you voted Leave or Remain last year, or Yes or No in 2014, vote SNP on 8 June to give me a mandate to demand a place for Scotland at the Brexit negotiating table, so we can try to keep Scotland in the single market. In Scotland, voting Labour risks letting in a Tory MP – only the SNP is strong enough to keep the Tories in check. Whether on Brexit, austerity or the future of our public services, this is a manifesto to make Scotland’s voice heard.”

Independence is the golden thread that weaves it way through practically every aspect of economic, social and environmental change which Scotland badly needs and seeks. This manifesto sets that out clearer than many before.