By: Tricia Wallace
In: Uncategorized

It’s been quite a difficult time in Glasgow – first with the tragic events unfolding as a helicopter crashed into the Clutha Vaults pub, and then with the reaction to the sad loss of Glasgow’s most famous adopted son Nelson Mandela. Both events have dominated the headlines, but the humanity of Scotland’s largest city has shone out to the world. It’s very strange to find not one but two books of condolence laid out in the lobby of the City Chambers, and I was very moved reading some of the comments.
So much has already been said about the Clutha tragedy in the media and on the streets of Glasgow, but I can’t get over the reaction people here have had, so determined are they to do something to help; benefit events for the families of those lost and for the injured; people stowing out the blood transfusion service; flowers laid and books of condolence signed. The emergency services and ordinary people involved have done Glasgow and Scotland proud.

I’ve heard call for a memorial, which would certainly be appropriate in the circumstances, and would fit well with the way the Firefighter’s Heritage Trail marks other tragic events in the city. It’s right that those who were killed should be remembered, but also that the city recalls in some way how it did all it could to help.

In a similar vein, the passing of Nelson Mandela reflects a city aware of it’s responsibilities and willing to step up. The awarding of Freedom of the City to Mandela – the first city to do so – was an example of this. Exhibiting Glasgow’s more gallus side was the decision to rename St George’s Place to Nelson Mandela Place, snubbing the South African consulate who were based there. The archive footage late on Thursday night of the scenes at the time gave me cause to smile on a sad night (if you didn’t catch it, there’s also a good photo on the Glasgow Story website). There are now floral tributes laid in the street which bears his name, and many people gathered there to mark his passing. Nelson Mandela was inspiring in so many ways, but the one particular quote that keeps returning to me is “It always seems impossible until it’s done.”

The Full Council meeting on Thursday will quite rightly reflect on these sad events, but is also set to discuss an SNP motion on the Independence White Paper. For me, given Glasgow’s internationalism, it’s place culturally and economically, and also with the issues of poverty and inequality that the union has so fundamentally failed to address, independence should be a concept which Glasgow wholeheartedly embraces. It is up to all of us to make that case though, and perhaps some Glasgow Labour Councillors will eventually follow the example of their colleagues in Edinburgh! We can but hope…

Scottish History now to be taught in our schools

For 300 years the Scots pleaded with the English to become British.

If we had never been independent we would find it very difficult to argue for the creation of a Scottish state starting from scratch. Our social and economic imperfections can be seen as much the same as those which afflict regions of England, suffering, like us, from the results of industrial change and decay. But these regions remain English, and thus they do not have the political option which is available to us. It is our history which confers upon us the right to aspire and, in due course, to decide. The more that Scots know of their history the more self-aware they become and the more ready to regard independence as a perfectly rational alternative to the present constitutional position. 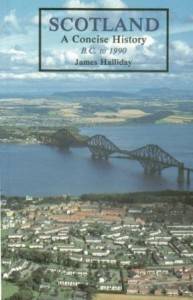 Little wonder then, that the study of Scottish history has been, to say the least, discouraged by all agencies of the British state. Politicians who determine policies and civil servants who put these policies into effect have been highly skilled in denying the oxygen of publicity to Scottish history, or in guiding study along channels seen as harmless.

Children of reasonably tender years have been permitted to hear tales from our history. But at this stage these tales are a kind of pageant, exciting or bland but safely past and now irrelevant. Or our history can be made a gory spectacular , memory of which is likely to intensify our shame and inferiority. Our history becomes something from which we have been delivered.

And of course it is “merely parochial”, always the first parrot-cry from political ill-wishers. So instead, as they grow older, pupils study the history of the state which we inhabit. The trouble is that that state is not a nation but an assemblage of nations. This concept is too much for our rulers to grasp. So our pupils and indeed our population are led to believe that King Alfred founded “their” navy; that Magna Carta guaranteed “their” liberties; that Spain’s Armada threatened “their” shores; that “we” beheaded “their” queen, and that they have had two queens called Elizabeth .In discussing historical events writers and speakers find themselves in a hopeless muddle over personal pronouns, too confused or too lazy, to decide which is correct for the occasion—”we“, “you” or “they”.

For 300 years the Scots pleaded with the English to become British. In recent times they have abandoned the forlorn attempt and have resignedly conceded that British is English. Those who speak of “the next king of England“ may be more accurate than they realise.

After all this, to hear that Scottish school pupils–”students” if you will–are not only to be allowed to study Scottish history, but are even to be compelled to do so, is an astonishing experience for those of us who for our lifetime have argued for such a decision without success. Now suddenly resistance collapses. Nothing like it has been seen since trumpets brought down the walls of Jericho.

It can’t all be thanks to the voters electing a Nationalist government. Resistance was never only from state functionaries. Academics, educationists and teachers of history have their own political loyalties. Some will hold to the Unionist view that the Scottish identity is past and obsolete, to be referred to if at all as a mere curiosity. The past to Unionists is not only all we have but all we should be allowed to have.

Then there are those whose preoccupations are with issues of class, or with regional rivalries or with conflicting sectarian attitudes. Already correspondence columns in the press have given a foretaste of what is likely to come. Those who didn’t want this advance of Scottish history’s importance to happen are getting their blow in first and loudly, professing to fear that this study will inflame Scottish chauvinism and “Brave heart “-style anti- English sentiment. Those who devise the future history curriculum are going to require great intellectual conviction and educational integrity. We have made a great and surprising stride forward but we are not out of the woods yet.