The week ending 1 July this year was a momentous one for Scotland.  At 5.30 on the morning of Sunday 25 Jun, the SNP’s former leader, Gordon Wilson, died in Roxburgh House Dundee.   He had been ill for a few short weeks. 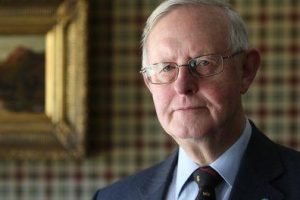 When I joined the SNP Gordon was the National Secretary, then the second most powerful person in the Party, after the Chairman.  At that time I was unaware of his colourful past as the instigator of Radio Free Scotland.  I had never seen any of the broadcasts, as they came at the closing down of the BBC for the night, but I doubt if they would have stretched to Peterhead where I lived, and I did not have a TV at that time anyway!

I do not know if Gordon actually made any of the broadcasts himself, but he was the Director of Programmes.  The first broadcast took place on 24th November 1956, no picture, sound only – they were pirates – words, nae pictures.

As far as I know, the man who provided the engineering technology was David Rollo, at that time the SNP Treasurer, but this was the first pirate station, and there were plenty of drivers, scriptwriters and speakers available.  The station had to evade the TV detector vans and the police so was highly mobile.  The book “Pirates of the Air” by Gordon Wilson was published by the Scots Independent and copies are still available.

Gordon was, as I wrote, National Secretary;  he gave that up after eight years.  He came and spoke to Corstorphine Branch; we took him to Haymarket and while we were having a coffee waiting for his train we asked him if we could nominate him for Chairman.  He said that he was going to spend some time in the garden and relax, as he had been too long at the top. In about 18 months he was running the Oil Campaign and standing in a by election in Dundee East!

He did not win that election but in the following February’s General Election he won Dundee East; 7 SNP MPs were elected, and a further 4 in October 1974.

He took over as Chairman from Billy Wolfe in 1979 after the SNP lost 9 of its MPs, and was plunged into internal factions, the 79 Group and Siol Na Gael, parties within parties, and at the SNP Conference in Ayr in 1982 he banned them.  Not a happy time.

However, he stuck to his guns, and kept the SNP in one piece;  I do not believe anyone else could have done that.  He lost Dundee East in 1987 and stood down as Chairman in 1990.  He wrote two books, “The Turbulent Years” and “The Battle for Independence” both published by the Scots Independent, and in the last years he formed a think tank “Options for Independence” in collaboration with Jim Sillars.

Gordon did not win Independence but he ensured the main body, the SNP kept going and independence will come.  I personally will miss him very much.

I was intrigued by a comment in the Herald this week by Les Montgomery of Highland Spring stating that the SNP government should be helping Tories get the best deal for Brexit. He said “We are a British  company.  We are based in Scotland  but we are a British company”

This rang a bell for me; to my recollection Highland Spring  reputed to be owned by the Sultan of Dubai.  I checked my facts and this was notstrictly correct.  The owner is Mahir al Tajir, a multi millionaire and  the richest man in Scotland. As far as I can gather he is the former UAE ambassador to the UK, but does not  seem to be a scion of the Sultan of Dubai.

Most of this story emerged from my working days; our vehicles used to pick up return loads from Highland Spring, but they refused permission for our drivers to use their toilets.

Our man in Surrey tells me that a Survation poll in Scotland Wales and Northern Ireland has shown the support for Nicola  Sturgeon taking a place at the Brexit negotiating table is running at 61%.

Regarding the above, the money for City Deals was  available to all devolved governments; not sure if there was a City Deal for Belfast.

However the £1 billion to Northern Ireland was public money – yours and mine- not for the benefit of the people of Northern Ireland, but to secure the survival of the Conservative Government.  Public purse – private pocket.

Cracks are appearing in the Tory Government as weaknesses re-emerge. Whatever possessed Mr Theresa May to call this year’s General Election we will probably not know for a few years, but I was aghast at her proposals aimed at the most powerful and dangerous section of the electorate – the Pensioners!  I say powerful, as they are no longer capable of generating more cash for their life style, so appreciate their benefits, still much lower than most of the EU, and dangerous – they vote!

We know how the Unionists manipulated talk of pensions during the Referendum Campaign, and how it boosted the No vote.  Mrs May can now add  a further word to her image , however she will not admit to being “Strong, Stable – and Stupid”.

The Tory pack is not just circling, I recall a book from my boyhood days “The wolves were in the sled”.  I never took it out of the library.

Struck by a headline in the Herald on 4th July “Hinkley Point’s £1.5 billion cost rise “will not hit customers”. What kind of Magic Money Tree is going to ensure this?

At the end of the day the consumers pay.

In January this year Norway transferred $781 million from its sovereign wealth fund, the first time since the fund was set up in 1996.  The fund is valued at $819 billion and is the largest in the world.

Norway discovered the same amount of oil that Scotland had about the same time.  The Norwegians were lucky, they were not ruled by a greedy and incompetent  Westminster government.

Peculiarly apposite in the week of Gordon Wilson’s funeral – his “It’s Scotland’s Oil Campaign”, based on figures from SNP researcher Donald Bain was dismissed by Westminster as minimal.  Thirty years later the truth emerged that our figure of £800 million a year was wrong – there were untold billions, disappeared into the Continental Shelf’s gaping maw, who knows where.

Think I told you already I have joined Pensioners for Independence;  I do not imagine I will be able to do very much, but I relate to the  title.  The website is : http://pensionersforindependence.scot/

As I noted above we are powerful and dangerous because we vote.

With regard to that last point, the Unionists have been a single issue political body, with one message coming over loud and clear – “No independence referendum”.  Apart from the trifling facts that they have no policies, or on the Northern Irish situation from the Tories, no principles,  they have run out of ideas.  Ms Davidson is flaunting her Colonelcy in the Reserves, Ms Dugdale is trying to come to terms with a highly popular Jeremy Corbyn , who she campaigned  against, and Mr Rennie is – not clear about anything.

What is indisputable is that they are all terrified of another Referendum.  If they were convinced that this time No would win, again, surely they should have the courage of their convictions and say “Bring it on” a la Wendy Alexander.

Nicola was quite right in saying that the people were scunnered of voting. In just one year we had a European Referendum, then the result of that meant the Tory Prime Minister David Cameron had to resign.  The resulting chaos finished up with the coronation of Theresa May as Prime Minister, no voting required  in Tory terms. She vowed no election, then went for a walk in the Welsh hills!

Make no mistake, we are in a War for Independence , and you do not win every battle in a war.  Things change, and campaigns change to adapt, tactics have to be adjusted and refined.  I am waiting for the Yes campaign being re-launched, because the dream has not died.