I was at the SNP Conference in Glasgow on Friday and Saturday last week and met many old friends and made some new ones.  As happened before, I feel the venue is too big, too many offshoots, but then again it is a pleasure to see so many people I do not recognise – once upon a time you would know most, but now we’re getting somewhere we have thousands of members.  It’s great.

Happily, we had no major rows, but then again, we do not wish them, the days when we could have a public dispute are largely gone, our enemies, particularly those in the media, are avid for any disagreement that they can brandish – shock, horror!  Differences will exist, but we should try not to wash dirty linen in public.

Nicola gave her usual splendid addresses and party morale is high; we are in a bit of a quandary with pressure for a Referendum from some, and caution expressed by others.  I was not enchanted with a long involved resolution linking independence and Europe and hoped it would be remitted back, but I was not a delegate, have not been one for some time.  It emanated from Edinburgh Western, a branch I use to belong to, who managed to lose the SNP seat with the largest majority in Edinburgh to the Liberals. I did not go to the debate, but I knew Gerry Fisher had been chastised by the Chair – not an unusual occurrence – but then any linkage with Europe is like a red rag to a bull for him.  Most times I agree with him, but am too old.

General impressions – well we keep reading about comments from the Unionists about “The day job” in petulance, and I have to say that they must be walking around half asleep.  There is a vast among of work being done by our Cabinet Secretaries, and we heard that in “Stronger for Scotland” on the Friday afternoon.  There was a report from every Cabinet Secretary, brilliantly summed up by Deputy First Minister John Swinney.  As one of my friends put it to me after “John is a class act”.

I always remember John’s actions when he was the Finance Secretary in 2007.  It was a minority government, so we had to get agreement with another party to get the Budget through.  In our manifesto, we had specified that we would put 1000 extra police on the beat.  In John’s first budget, he put in 500 police!   I was incensed – we had promised 1000 police, not 500 – we broke a promise.  In the course of the budget negotiations, the horse trading, the Tories said they could back the budget but they needed something.  John thought long and hard, then opened his desk drawer “Would you be interested in 500 police?”  So the Tories got a sweetener they could boast about, and we got 1000 police.  I was impressed.  After getting through 9 years, balancing the budget every time with no over spends, John is now tackling Education – more power to his elbow.

I read in the Herald on Monday this week a comment from Secretary of State for Scotland, David Mundell “I am willing to look at any proposal to take forward Scotland’s interests.”   Mr Mundell is the sole Tory in Scotland, with a majority of 798, and owes his advancement to that, the only entrant in the one horse race; as the Prime Minister has not included him in her Brexit delivery group I think he may be suffering delusions of grandeur, or his perception of himself is not matched by Mrs May.

Incidentally, there are 330 Tory MPs in the House of Commons, or perhaps 329, until the by election to replace David Cameron, and 318 of them are English.  The Tory majority is only 12 –  11 Welsh and Mr Mundell.

One other fact has struck me; in all the furore about the unfair treatment of women’s pensions I wonder if we are highlighting the fact that while Westminster makes life more difficult, the Scottish Government will keep giving out bus passes to women at 60.  Perhaps I missed that.  Men get them at 60 too.

Two things in particular are standing out from the 2014 Referendum.  The first is that the much talked about and hotly disputed right for Scotland to be in the EU is now defunct.  England and Wales decided to leave the EU, making that Unionist prop redundant.  In fact, their decision betters the case for independence, and even so frees us up to seek other alliances, with Norway in EFTA for example– this would help us to reclaim fishing rights.

The other issue is currency.  In February or March this year I saw Colin Mackay on STV interviewing Mervyn King asking him about the currency issue during the Referendum campaign and he said that there had been a simple solution.  When I asked Colin afterwards he said he had bought Meryn King’s book “The End of Alchemy” and turned to the chapter on Scotland.  Lord King had been interviewed a number of times about his book, but no interviewer had actually read it!  Colin had.

On the last Tuesday in March I went to Waterstone’s in Livingston and bought the book.  I never got around to reading it because on the Saturday of that week I was rushed into the Edinburgh Royal Infirmary.  For some strange reason I was not able to do much reading while in hospital.  So after I got home I started reading it, only five pages at a time because I am not good at reading non-fiction J  There was no desperate hurry, I just wanted to read it.

In the chapter entitled “Marriage and Divorce – Money and Nations” which I have just reached, he wrote “When the referendum took place, the currency question was unresolved.  But there was an answer.  The simple  and straightforward solution was  “sterlingisation”.  Following a “yes” vote , the Scottish Government could have announced the next day that an independent Scotland had no intention of issuing its own currency and that all contracts denominated in sterling would always be legally honoured in sterling.  There would be no formal currency union.   Nothing would change.  The Yes campaign could not however, openly advocate such a solution, because it would have made clear that independence would give Scotland no real say over its monetary arrangements- they would be borrowed from England, exactly as they are today, because the relative size of the two economies mean that interest rates are largely unaffected by conditions in Scotland.  Politically, sterlingisation would have provided an answer to the currency question, but it would have taken the edge off an independent Scotland.

“The No campaign was also misleading.  To admit that there was a simple and straightforward answer to the currency question would have undermined its argument that independence would be an economic disaster.  That proposition was always implausible. There are many small and successful countries in the world, and there is no reason Scotland could not have joined them.”

Towards the end of the chapter he wrote “In the General Election of 2015, the Scottish Nationalists won fifty- six out of fifty- nine seats in Scotland.  So independence will remain a live issue.  If for example, the UK as a whole were to vote to leave the European Union, while in Scotland a majority voted to remain a member, the clamour for independence would be even more difficult to resist than in 2014”.

When I wondered why he had not said this at the time of the Referendum, I postulated that perhaps he was

bound by his former employer; a friend stated that more probably he had a book to sell.

In any event that was another Better Together prop that has been knocked away.

As to the restriction on an independent Scotland, we can adjust that as we go along – no independence, no chance.

Until the beginning of this year I was the Editor of the Scots Independent monthly newspaper, a post I held for 10 years.  I kept getting letters from readers about the 6000 square miles of sea filched, but I was unable to locate any info.  Eventually, I asked Professor Chris Harvie, at that time a Fife Region MSP if he could raise the matter as a Parliamentary Question.  His response was to go to his PC, and he then produced the co-ordinates of the area involved. 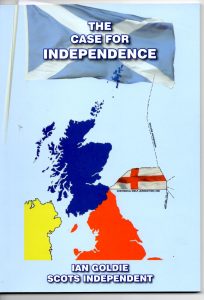 The list was as clear to me as if it had been written in Greek; after it had been burning a hole on my desk for a few weeks, I approached a friend, Alistair Kidd,  an SNP member, and a retired Merchant Navy Captain.  He went to the Royal Forth Yacht Club and purchased the Admiralty chart of the North Sea, including all the oil and gas installations.  He then plotted the co-ordinates, and the result showed 6 oilfields in that patch of sea; they were Fulmar, Auk, Clyde, Janice, Angus and Fife.  The chart, dated 21 Aug 2003, was massive, the size of a door, so the SI Secretary, Denholm Christie, a retired architect, painstakingly reduced it to a size suitable for printing in the paper.  At the then Wee County News, the printer, Bryan Watson, added the colour, including The St George’s Cross for emphasis.  The map was published in the Scots Independent 2010 Summer Special.  It was also put on the cover of a book, The Case for Independence a collection of articles for the Scots Independent by the late Ian Goldie.

In a letter to The National a couple of weeks ago concerning the movement of the sea boundary between Scotland and England Ms Beverley Burns from Dundee commented about the Argyll Field;  this intrigued me as that was not marked on the map;  Argyll was the first field to produce oil, but a brief search showed that it had been closed down so no rig there!

This started a chain of thought:  Transocean Rig aground on Lewis, en route to be broken up in Turkey, thousands of highly skilled jobs lost to the industry, out of use rigs parked at Invergordon and other places (including the one from the Argyll field), and in the last few weeks Dalyell Steel Mill re-opening, shipbuilding on the Clyde and cruise liners to build, and with fishing hopefully being repatriated we could do with a few Fisheries cruisers.

And at the moment it looks as if the Ministry of Defence’s promised  Type 26 frigates will never be built.  Nae money.

Join the dots, another industrial revolution in recycling.  With independence we can do so much – the bits are all there.

And no restrictions on state aid to shipbuilding if we are not allowed in the EU.