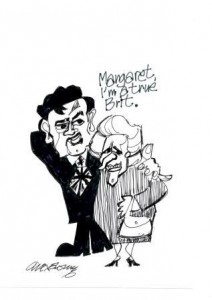 In 1979, before the Referendum, a former Prime Minister, Lord Douglas Home, Tory, said “Vote No and we will give you something better”
While Scotland did not vote No, not enough voted Yes to win the Referendum; the devolution project was dumped and the “something better” was Margaret Thatcher.

In 2014, before this Referendum, a former Prime Minister, Gordon Brown, Labour, has said “Vote No and we will give you something better”.

There was no devolution question on the ballot paper, Westminster’s rule, and thousands of postal ballots had been cast before this non option was mentioned!

Margaret Thatcher has gone, but this very week, Cameron, Clegg and Miliband are in Scotland trying to regain lost ground. Mr Farage of UKIP is coming up next week to support the Union, and London Mayor Boris Johnston is salivating at the prospect of becoming Prime Minister and sorting out these Scots.

Shades of the past
20 June 2007
Speech by the Chancellor of the Exchequer, the Rt Hon Gordon Brown MP, to Mansion House

My Lord Mayor, Mr Governor, my Lords, Aldermen, Mr Recorder, Sheriffs, ladies and gentlemen.
“Over the ten years that I have had the privilege of addressing you as Chancellor, I have been able year by year to record how the City of London has risen by your efforts, ingenuity and creativity to become a new world leader. 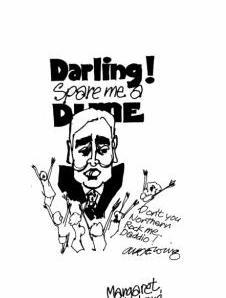 Now today over 40 per cent of the world’s foreign equities are traded here, more than New York:

• over 30 per cent of the world’s currencies exchanges take place here, more than New York and Tokyo combined,
• while New York and Tokyo are reliant mainly on their large American and Asian domestic markets, 80 per cent of our business is international, and
• in a study last week of the top 50 financial cities, the City of London came first.

And I believe the lesson we learn from the success of the City has ramifications far beyond the City itself – that we are leading because we are first in putting to work exactly that set of qualities that is needed for global success”.

There was a run on the Northern Rock Bank in September 2007 resulting in it being nationalised in February 2008,forerunner of the big banks crashing. Perhaps the City of London had a new golden age, but not for UK citizens.

Stands Scotland where it did?
We are now in the final week before the Referendum and it is odd to be starting the Flag with a quotation from Shakespeare – Macbeth, a largely fictional tale. Shakespeare wrote it as a tribute to Jamie Saxt, the Scottish king who had inherited the English crown. He promptly forgot about a troublesome Scotland seeing all his troubles dealt with “at the stroke of a pen”. We have had problems ever since.

A shift in an Opinion Poll has galvanised the Westminster Government into a sudden realisation that the unthinkable is about to happen and alarm bells are ringing loud in Whitehall. Panic measures are too late and too little. The establishment and their dupes in Better Together have been complacent in their conduct of this campaign, relying on the media to print every lie or half truth with impunity. As the Rev Stu points out in the very first sentence of his Wee Blue Book “Scotland is served by 37 national or daily newspapers. Not one supports independence. (The only publication to back a Yes vote is a weekly, the Sunday Herald)”.

We have been hearing this on the doorsteps, constantly having to correct misinformation. Scotland’s newspapers, the free press so cherished by democracy, has been an affront to democracy, and it has been left to the social media to correct the gross imbalance. Newsnetscotland, Wings over Scotland, Derek Bateman have all done their media unmasking. This website was set up to do the job they are doing but we were unable to provide the resources; however we have now been published every week since 9th June 2000. Nervousness about being sued clipped our own wings a bit, also our inability to take comments, but we are still here. I read the above everyday and applaud them.

I was, and still am, confounded by the callous disregard of Westminster politicians for the poorer people of the UK. I still cannot work out how the economic mess engendered by the banks and the human greed of those running them, who have taken their money and run; Westminster government now oppresses the poor to pay the bill. Not one banker has been jailed. As for the politicians who we entrusted to look after our affairs, may of them have had their complacency rewarded with membership of the House of Lords, where signing in for a day, £300, gives them more than the minimum wage for a week, for minimum effort. My social conscience is outraged. Only 650 MPs and more than 800 Lords and Ladies to watch them -brings to mind a cruel put down from a few years back “You’re not very good, are you?”

Despite my 48 year involvement in the independence movement, I thought my contribution was over after the Dunfermline by election last November mainly because I was sure my days of door knocking were over; both my sons agreed! So I came late to be physically involved in the Yes campaign, but many have been involved for the last eighteen months, or longer. The basis for Yes was originally the SNP, but the movement has outrun that, and the grassroots have outrun the Yes campaign. The vast majority of the activists are not SNP as far as I can see. As a matter of fact I do not know what they are and I do not care, as a long time nationalist they want what I joined the SNP for in 1966, Scottish Independence, and that does me.
It is remarkable, barely believable, but I see it with my own eyes, this campaign is about independence for Scotland and our desire to make our own decisions. New people are turning up every day to work in the campaign and they are enthused and wanting to share their enthusiasm. I am thoroughly enjoying it, although sometimes I feel like Methuselah!

Media movement
I am not aware as yet if there has been a movement in the media; last week I bought a Daily Record – don’t remember doing that before- as the first 7 pages were given over to the Yes campaign. This was balance (a rare trait shown in our media) as Better Together had been given the same coverage the preceding day. It may have been because a lot of their readers are turning to Yes and they wish to protect their market, or are they sniffing the way the wind is blowing and adjusting their sails? I do not know. I read also that Rupert Murdoch is eyeing the situation up, and could have a last minute conversion to Yes. Both these papers are not creating trends, they are watching Yes and following its trend. Again, I will not castigate late supporters to the cause, but welcome them, irrespective of their motives, or motive – which is money.

MORAL DILEMMA FOR OLDER VOTERS
“You hold the key to a better future for Scotland’s younger generations. The future of your children and grandchildren is at stake if you vote N0. The polls show support for independence in all age groups apart from the over 60s. I am one of you. I am in my mid-seventies. I shall stand ashamed if my generation blocks the opportunity independence gives our children and their children to build a fair, just and prosperous Scotland. Older people generally do not like change. But we cannot be selfish. We have had our day.”

This was said by Gordon Wilson at a meeting in the Pavilion, Castle Green, Broughty Ferry, Dundee in a hard hitting and hard headed approach to pensioners.

“There is an ethical question as to how moral it is for an outgoing generation to cling to the past at the expense of those coming after them. The next generation will pay their taxes for your pensions, medical services and care. This is an issue for older folk to consider before casting their vote. More affluent pensioners should also take into account that many of their age group live in poverty and will continue to do so if Scotland remains in the Union. You have a duty towards them.

You may worry about the uncertainties of independence. The greater threat comes from devolution within the UK. Powers for the Scottish parliament are meaningless if Westminster controls the purse-strings. Both the Conservatives and Labour have agreed £25billion of expenditure cuts.

After Scotland is safely corralled in the UK, the current Barnett funding arrangements will be abandoned. The effect will be to put such a pressure on a devolved government that it will be faced with cuts in services such as free personal care to protect the health service or to increase taxes. If it is tax increases, the younger generation will resent that when you have deprived them of opportunities for independence by voting No, they will have to pay for your selfishness. When they are driven to emigration as around 40,000 of our young people are every year, it will be the fault of No voters.

Professional politicians are frightened to offend you by telling you the truth. I have no such fears. I am a pensioner. I am one of you. I appreciate the loyalties of some of you will be towards Britain as you experienced it in earlier years. But the world has changed. Britain has changed. It is at risk from crippling debt made worse by wasteful military adventures.

You will have seen the huge publicity given to Gordon Brown, the former Prime Minister making great promises. It is a mere puff of smoke. He suggests no new economic powers for the Scottish Parliament. All Westminster is promising is that you will get a cosmetic offering faster. The overture is born in panic. Scotland has been tricked before. It will be daft for us to be conned again. Vote No and London will win!”

I have received information from a reliable source, that “those in the know” in the oil industry have been told to keep their mouths firmly shut about the extent of oil discoveries west of Shetland until after the Referendum.