Big hoohah at one of the committees last week:  Rupert Soames, CEO of Aggreko was giving evidence on behalf of Better Together saying that “No”  was in the best interests of Aggreko, a Scottish company and its employees.  He got quite vehement about this.  A day or two later the back page of the Herald was full of Mr Soames’ move to Serco – a company involved in outsourcing.  Must have seen the writing on the wall.

Aberdeen Council have narrowly been defeated on a proposal by Finance Convener Willie Young (defeated in the Donside by election) to bar all Scottish Government Ministers from entering council property.  The voting was 21 – 20, the variance being due to a Tory councillor obviously deciding that this was a crazy idea;  a vox pop showed that all spoken to +thought the same.  Bunch of bairns was one comment.  I think this tactic is also being used in other Labour controlled councils, perhaps West Lothian.

Aberdeen Council again, along with the notice sent out with the Council Tax they are telling people to vote No;  not in so many words just saying they believe people would be better together.

It gives me cause for doubt –  I am convinced Scotland is not too wee, it is not too poor, but there are definitely a few, mainly Unionist politicians, who are too stupid.

Crawford Beveridge, from the SNP Fiscal Commission gave evidence to the Parliament this week.  His calm, logical approach was in marked contrast to some of the hysteria we have seen from Better Together.  He was very impressive.

The Saviour of the World

Terribly excited to see in the Herald of 6th March that Gordon Brown MP – for it is he – has emerged from the crypt to defend the Union.  He has not joined the Better Together lot, doesn’t was to sully his hands with colluding with Tories and Lib Dems, or even his erstwhile Chancellor, one Alastair Darling.  His vehicle is United with Labour  –  wonder if he has cleared it with Johann Lamont;  no doubt he will give an impassioned speech at the Scottish Labour Conference to a standing ovation. 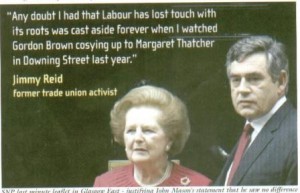 I am excited because it means the No campaign and its myriad participants, some New Labour, the Westminster Cabinet, some Liberals, virtually all big business, the banks (of blessed memory) and odd parts of the EU politburo, are getting very worried.  It reminds me of a comment by Iain Macwhirter re George Galloway :”If George Galloway is the answer, what is the question?”

Do not be diverted by another egotist, it is Gordon Brown we are speaking about.

When I feel the need to while away the weary hours, I revert to the speech made by Gordon Brown at the Lord Mayor’s banquet on 20th June 2007..

These were his opening words:

Over the ten years that I have had the privilege of addressing you as Chancellor, I have been able year by year to record how the City of London has risen by your efforts, ingenuity and creativity to become a new world leader.

Now today over 40 per cent of the world’s foreign equities are traded here, more than New York:

When some one sent me this speech away back in 2007, I thought it was a wind-up.  Surely to God nobody would use such cringing sycophancy to that bunch of hooks , crooks and comic singers (the latter not making us laugh)?  However I checked and was so moved that I copied the speech, and kept it, not knowing what might befall it as the years went on.

Note June 2007, and by June 2008 the banks were in crisis, and we are in the worst economic mess in my lifetime.  The City of London was the tail wagging the dog, and that was Brown’s deregulation theory..  (I am sure that he smiles quietly now that he sees the UK’s  support for sanctions compromised by the fact that the City is awash with Russian money and they daren’t touch them!)

Other items we have not forgotten is him singlehandedly destroying the occupational pension market, and the oh so generous 75p a week he awarded pensioners;  I go down on my knees and give thanks for that every night, grateful pensioner that I am.

Anyone wishing a copy of the speech can email me on jim@scotsindependent.org

Produce a review of this book and you will find that you could review it again to-morrow and on many subsequent to-morrows. You could do so without repeating yourself, so great is the wealth of material which Professor Harvie has amassed. As a result of the scope and depth of his researches and his insights, his book is equivalent to a library, and each of its chapters to a volume. Just as impressive is the degree of professional skill which enables him to handle a flow of discoveries and ideas which would have quickly swamped a less gifted author.

“The Floating Commonwealth” is the name he has given to the communities of the people who lived and worked along the shores of the “Inland Sea”–that sea which Scots all recognise as that once sailed by the Norsemen, and patrolled in turn in later times by the galleys of Somerled, the Lords of the Isles and Clan Campbell. The shores of that sea are now some in Scotland, some otherwise, but Harvie’s thesis is that there was in these places a shared experience. Glasgow, Belfast, Dublin, Cardiff, Bristol and Liverpool all have a common feature–they were the creations during the years covered in the title of people of a practical bent and co-operative purpose. For them all the sea was a thoroughfare as also were firths and lochs, providing for the exchange of goods and ideas. Along this littoral Harvie sees a coastal arc inhabited by the pioneering, the active, the initiators of change and development.

It was a sound idea to use the picture of a Cunard liner on the book’s dust cover. The livery of that famous company was inherited from the earliest days of steamers on the Clyde. The Napier brothers gave their ships red funnels and in turn younger generations of their descendants, Hutchisons and David MacBrayne, continued the tradition. Among their business associates were J and G Burns, owners of the steamship company which merged with the Liverpool firm of Laird to form the Burns- Laird line, which until recent days dominated trade between Scotland and Ireland. Seeking to form his new company Cunard found partners in Burns-Laird and adopted the red funnel, an inherited symbol from the early Clyde pioneers.

Meanwhile back at the centre of things during these years there were the great and powerful, qualified by property and generations of inherited privilege to administer centre and fringe alike. For these people Harvie has provided a splendid phrase, “Court, consols, appointments and Test matches”.  They dictated politics throughout these years, and as politics have turned out modern attention has come to focus upon national boundaries, and to look on the sea as a kind of moat. But for the insistence on English hegemony on the part of this elite the Floating Commonwealth might have found political expression in harmony and co-operation, genuine and not contrived.

It is the abundance of such insights, supported by his researches, that determines the excellence of the book; Harvie plays fair with his readers. He explains his purpose and his intentions, and then gets on with proving to us that his reasoning is both interesting and sound. Between his Preface and an overview which he calls “Prelude”, he and his editors have provided a map of the Inland Sea indicating the economic activities of those on its coasts, so we know right away the pattern of the background in the author’s mind.

He then turns to the studies of people and places at various stages between 1860 and 1930. Sometimes the setting is in Scotland but as often in Ireland or Wales and he is well-versed in the issues of the time among our Celtic neighbours. Indeed he examines the concept of Celticism in its various aspects with more accuracy and fewer histrionics than we often encounter in other works.

In reading his reflections upon “Places and Voices” we appreciate more fully not just economic and social insights but also the development and the role of the Arts, and of the personalities who have left us the literature and the music of the years covered by the book. Look at his Index, and marvel at the number of creative talents identified, testimony to the painstaking and devoted energy which he brought to his researches. Then go back to the text and appreciate what fruitful use he has made of his discoveries.

In “Ourselves Together” he invites Scottish readers to understand more than they have done before the experiences in Wales and Ireland which impacted upon Scotland. Education and religion, so often occasions of dispute, are discussed and explained with a wealth of quotations and cross-references which enlighten on all counts.

He does not impose strict chronological limits to his themes but when he writes of “The Breaking of Nations” we are nearing the tragic disappointments of War and Depression. The Commonwealth which might have been, comes to be tested almost to destruction, and Harvie may reveal some bitterness as well as resignation as he reminds us that only during wars and similar emergencies had England’s ruling class shown any awareness of or interest in technology.

Harvie has not written for Nationalists alone by any means, but Nationalists will find particular satisfaction in reading what he has to say. He has given them the opportunity to deepen their understanding and broaden their outlook, and we will all be greatly the better for this quite remarkable book.