“Don’t raise your voice, raise the quality of your argument!” That’s a mantra which was drummed into me by the late Bill Johnston when, as a young, ambitious and very opinionated Nationalist I was losing a debate with him yet again. Bill was then the Convenor of the Association of Scottish Nationalist Trade Unionists, a forerunner of the SNP Trade Union Group. He mentored our group, giving us the benefit of a life time of experience as a Union activist. We would often meet in his house under the shadow of the Erskine Bridge as it was constructed, and where he would hammer home the END_OF_DOCUMENT_TOKEN_TO_BE_REPLACED

Four years ago, our summer holiday comprised of a week camping at Loch Lomond and travelling into Glasgow to attend events at the Commonwealth Games. There was a fantastic atmosphere everywhere and it was a privilege to see the athletes compete. That the subsequent games have just ﬁnished in Australia’s Gold Coast is proof that time really does seem to pass quicker the older you get! Scotland’s medal haul totalled 44 consisting of 9 Gold, 13 Silver and 22 Bronze – a remarkable achievement. From Duncan Scott’s outstanding collection of 6 medals to the heartbreaking end of Callum Hawkin’s marathon, there were many memorable moments END_OF_DOCUMENT_TOKEN_TO_BE_REPLACED 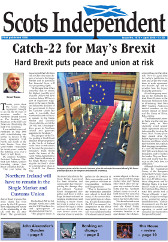 The April 2018 digital issue is in the shop END_OF_DOCUMENT_TOKEN_TO_BE_REPLACED

It seemed to me that just having survived the Easter weekend there was very little for me to comment on as politics seemed to have been on holiday (well apart from Jeremy and the wrong group of Jews but I dare not go down that road!) Cup of coffee, my turn for the newspaper. Nothing to write home about in the Herald, then I get to the opinion page. Today (Tuesday) it is Chris Deerin. I was enraged at his apparent belief that the BBC fits the idea that it was supposed to live up to – a commonly owned project to “inform, educate and END_OF_DOCUMENT_TOKEN_TO_BE_REPLACED