You would never know from press coverage that the First Minister has been in China this week working on our behalf. Courtesy of the Scottish Governments news update :- The First Minister was on a five day trade mission to China and Hong Kong where she helped support more than 70 Scottish businesses in innovation, education and design. Some highlights included: Promoting Scotland’s North Sea oil and gas capability Talks with State Councillor Yang Jie Chi – who holds China’s most senior foreign affairs role Keynote speech on gender equality in Beijing View pictures from the visit Read more about the visit on the First END_OF_DOCUMENT_TOKEN_TO_BE_REPLACED

For a long time now I have been sympathising with social media friends in England. If they have social values of any kind they have been left with nowhere to go. Politically England has been moving further and further to the right to try and solve their problems. Along the way they just seem to be creating more problems. At the moment the party of the working class is facing two leadership elections. The “debate” the other night for the Scottish leader was simply pathetic. It was also a complete waste of time, as is the election. The leadership in England has decried there will END_OF_DOCUMENT_TOKEN_TO_BE_REPLACED

As the BBC do not like to share the good news stories about the Scottish NHS, we thought we would share this press release with you. SNP MSP Bob Doris has today welcomed new figures showing the number of beds occupied by delayed discharge has fallen to its lowest level since 2013. Today’s figures from ISD Scotland show a reduction of nine per cent in May 2015 – or nearly 5,000 bed days – when compared to the same month last year. The data also shows improvements in Accident & Emergency waiting times have been sustained in the week ending 19 July – with 95.2 END_OF_DOCUMENT_TOKEN_TO_BE_REPLACED

The SNP has today [Tuesday] called for the unelected, undemocratic House of Lords to be scrapped. The move comes on the back of reports that David Cameron is to press ahead with the appointment of around 200 new peers, bringing the total to over 1000. Commenting, SNP Shadow Leader of the House of Commons Pete Wishart MP said: “The House of Lords has never been held in such contempt by the Scottish people who see it as nothing other than a repository for the cronies and donors of the UK parties. With its Lords, Ladies, Baronets and Earls it can only be described as the most END_OF_DOCUMENT_TOKEN_TO_BE_REPLACED

As the latest Greek tragedy unfolded two weeks ago in Brussels, one thing which constantly baffled me was the harsh and unbending positions adopted by some of the smaller EU members particularly Finland who seemed to be revelling in their 15 minutes of notoriety.   I could understand the Germans, who had over 56 billion euros worth of debt in the pot. I could understand that Merkel would find it difficult to sell more aid to the Bundestag. But she seemed to be playing a relatively “good cop” to Wolfgang Schauble’s “bad cop” and with some prompting from Francois Hollande it seemed that a sensible END_OF_DOCUMENT_TOKEN_TO_BE_REPLACED

Commenting on the vote on the second reading of the Welfare Reform and Work Bill in the House of Commons tonight (Monday), which passed by 308 to 124 – with the Labour Group abstaining, while some 48 Labour MPs rebelled to vote with the SNP against the Bill – the SNP said that Labour’s failure to oppose it would haunt them through next year’s Scottish Parliament election and beyond. Commenting, SNP Fair Work and Employment spokesperson Hannah Bardell MP said: “The Tories’ cruel welfare cuts damage the working poor and vulnerable people, and had to be opposed. “Labour had the perfect opportunity to join the SNP in a progressive END_OF_DOCUMENT_TOKEN_TO_BE_REPLACED

I was delighted to see on facebook today a link to the Scottish Affairs Committee page at Westminster. Not only was it openly being shared but it invites us, the people who elected them, to have a say in their programme for the current term of government. I have not seen this level of openness from Westminster before. Could it be that what we practice at Holyrood is being shared with the good people of Westminster? I have a feeling that this may be the case as this committee is being chaired by Pete Wishart of the S.N.P. Hopefully the example may be followed by END_OF_DOCUMENT_TOKEN_TO_BE_REPLACED

We often hear media pundits talking about the advantages of public figures having what they refer to as “Hinterland”. Of having a real working life before and outside of politics. One definition of hinterland is “An area lying beyond what is visible or known: the strange hinterland where life begins and ends”. For me it is that indefinable yet unmistakable quality that someone has when they have lived life properly, lived or worked in different places and fields and among real people with real lives. Found a few paths less travelled and emerged as their own person. And in this last week this has been END_OF_DOCUMENT_TOKEN_TO_BE_REPLACED

Commenting on reports that UK military personnel have been involved in conducting air strikes in Syria, Scottish National Party Foreign Affairs Spokesperson Alex Salmond MP said: “This action clearly flouts the democratic decision taken by the House of Commons two years ago for the UK not to take part in a bombing campaign in Syria. “And just as inexcusable, the Defence Secretary Michael Fallon led a Commons debate on Syria only this month – before which he briefed about the likelihood of the UK bombing in Syria in the future – yet he didn’t say a word about UK military personnel already sent into action. END_OF_DOCUMENT_TOKEN_TO_BE_REPLACED 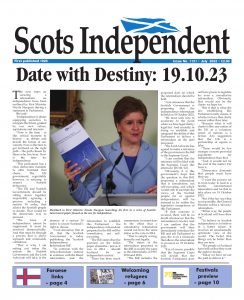