The Flag in the Wind comes to you every week thanks to the hard work of our regular volunteer contributors:

Grant became Editor of the Scots Independent in February 2016. Grant’s work life is split between teaching at the University of Stirling and practicing as a political and public affairs consultant with a varied career in the SNP, industry, public and third sector. He first stood in a council election in 1999, fought the Anniesland by-election after Donald Dewar died and was elected to Glasgow City Council from 2007-12. He has served on the Board of the Scottish Fire & Rescue Service, Chartered Institute of Public Relations and Friends of the Earth. He is a volunteer with Stirling City Radio. Brought up in Perthshire, he now lives in Stirling.

Stephen first joined the SNP in 1966 and has been an active campaigner ever since. Was a Councillor in Falkirk. He brings his own quirky take on current events. Having seen the highs and lows over almost 50 years, Stephen refuses to take either of them too seriously

Maureen brings a perspective from the Highlands. 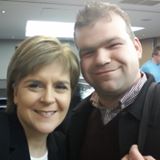 I used to work for Scottish Consortium for Learning Disabilities where I travelled to present to different organisations such as Scottish Government and National Autistic Society.  I spoke about challenges and stigma I experienced in my journey getting into employment as someone with a learning disability, and how I overcame this

And   I have been working on radio for 14 year and I have been on radio Scotland a few times on some discussion panel and was on a Feature on a Radio Scotland Documentary young free single and Disability and been on Radio 4 listen in Project I work freelance with the Sunday Herald doing a column on the disability’s sports in Glasgow’s 2014 commonwealth games and also on the referendum.