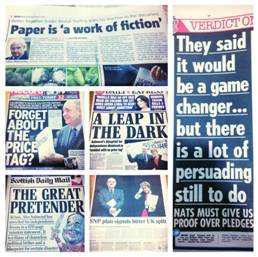 One of the most momentous weeks of my life took a turn for the worse by Saturday morning.  Tuesday’s media launch of the White Paper was a fascinating study in how London-based journalists ‘just don’t get us’ and/or resent the notion that self-determination – which they would support in practically any other part of the world, with gusto – is being espoused within mainland Britain.

The difference in how Scottish-based journalists asked a question which showed their understanding of context and complexity was a credit to them. When the likes of the BBC’s Nick Robinson posed a question he sounded like a public school boy sneering at the working class chappie in a cloth cap.
Michael White of the Guardian likewise drew my ire for his sexist/sneering comment on Twitter which I couldn’t help replying to.

The Unionist media, of course, had a field day trying to spoil the message of the White Paper: Scotland’s future is about the hopes and aspirations for generations to come.

A gold star for the best communicator for Yes Scotland goes to Alex Bell, former journalist and special adviser. He did a good stint on Call Kaye where his ability to talk about complex currency issues in a way that even I understood was first class. If ever anyone should be moved into Hope Street now to re-vamp how we promote key messages, it’s this man.

My second gold star goes to David Leask.  He tweeted international reaction to the White Paper’s launch all day. He has a regular blog – As Others See Us – on the Herald site where he captures how the iScotland debate is being reported around the globe.

It’s on days like the White Paper launch that I tend to take to the Twittersphere. Comment and reaction is fast and furious. Better Together had a clear script ready. In fact I nearly walked into their briefing for Lamont, Rennie and Davidson in the MacDonald Holyrood Hotel on Thursday lunchtime the week before.  I couldn’t help thinking that their fast reaction on childcare suggested some insider knowledge but I won’t go down conspiracy routes, it’s not worth the candle.

Sadly, for all the trite, lies and bending of truth by Unionist supporters, the unacceptable face of Indy support reared its head in at least one tweet I noticed. I’ve redacted the culprit’s name to save further embarrassment but no matter how daft some people’s views are, Indy supporters cannot resort to despicable language and attitudes such as this.

The debate continued all week with fine combative performances such as Nicola Sturgeon against Alastair Carmichael on Scotland Tonight to highlight but one. And then just as the week was coming to its thoughtful timely analysis with the Sundays, disaster struck in the most unlikely and unwelcome way with the helicopter crash into the Clutha Vaults bar. As most people woke to the shocking news, the hypnotic impact of real-time news reporting entranced us all.

As a board member for one of the emergency services, I’ve watched and been briefed about how incident scenarios are prepared for. Since late Friday night, police, fire, ambulance, council and health services, as well as many more, have toiled away to rescue people from that horrific scene. Not everyone survived and our condolences to all those bereaved. Our thanks and praise to the emergency services and ordinary citizens of Glasgow who played their part. I’m sure that if this were to happen anywhere else, there would be that same courage and dedication. It is who we are.

“Stop the World. Scotland wants to get on.”

“I mean to win, Jimmy” she insisted.  Jimmy privately thought he was not so sure

We all like to play the game of “You always remember where you were when…” and one such memory is Winnie Ewing’s election as MP for Hamilton on 2nd November 1967.  But unless you are at least 50 you will have no meaningful memory of the event at all. Luckless younger persons, you’ll never know what you missed. 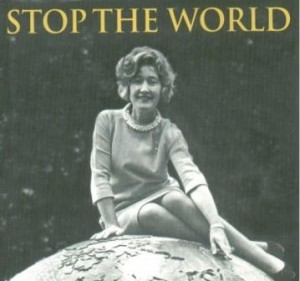 Certainly you can have no difficulty in knowing what came later. Archives hold the full record of her career, and that career is, as she has gleefully remarked, “Not Modern Studies. History.” So this is not really the occasion for a Political Scientific study but rather an opportunity to remember. We control no memory but our own, so it must always come over as personal.

A brief bit of autobiography to explain how I came to know Winnie.  I was 17 before I ever met any other Nationalist at all. That was when as a student I joined the Glasgow University Scottish Nationalist Association—GUSNA—in 1944. Returning in 1948, I rejoined and heard about all the things that had happened since being rudely interrupted. Most reports centred on the 1947 Rectorial campaign waged on behalf of James Bridie. The only identified activist from that campaign who was still around was Winnie Woodburn.

So I knew of this girl, but she was by then a law apprentice who didn’t have the leisure to float about the students’ Unions. GUSNA always met in the women’s “Queen Margaret” Union, because they owed money to the men’s Union, and were not allowed to rent Union premises. That was why we Scot. Nats. were often entering and leaving Q.M., and came to know, at least by sight, many of its personalities, formidable ladies many of them.

One however, who always exchanged greetings in friendly fashion was Winnie Woodburn. We did have a few mutual friends, one of whom became my wife and another our best man, but that was later.

These wonderful days had to end and we all went off to work. From my activities in GUSNA, and in the successful campaign to make John MacCormick Rector of our University, I moved in due course to be SNP Chairman, and had to cope with restless elements in the Party who disliked Chairmen on principle. Some of them hoped to use as a troublemaker Phyllis D. McCloskey, a brave, talented and fiercely Nationalist history teacher. Their plan fell through when Phyllis found that she had taught my wife, which made her feel that I couldn’t be all that bad. In fact she became a valued and respected friend.

Her lively intelligence led her, in her early days of retirement, to attend classes in Scots Law in Glasgow’s College of Commerce. From these classes she returned singing the praises of her lecturer, a wonderful young woman called Mrs Ewing. Soon we confirmed that Mrs Ewing and Winnie Woodburn were one and the same. Phyllis was full of excitement to have identified Mrs Ewing as a Nationalist, and urged me to see about making use of this talent which had appeared. Able to reassure her that I knew who she was talking about, and was happy to support her judgement, the next move was to tell Robert McIntyre who was always on the lookout for candidates.

I always enjoyed Robert’s regard because, as he would explain to others, I had been alone in standing with him in 1955. In 1959 we had 3 others including David Rollo in Hamilton. In 1966 a by-election was forecast in Hamilton, and David’s spadework there made it seem worth fighting. But by whom? Robert had done his homework; I was a kind of character witness, and Tom Gibson, the Party’s President, was called in to give his opinion. The upshot was that at Tom’s retirement dinner the SNP candidate-designate for Hamilton was, with her husband Stewart, brought before a full-house Party gathering.

Two things I marked at the time and remember clearly since. One was how fervent was Stewart’s support. The other was how determined was Winnie’s commitment. Confident, energetic, thoroughly well-informed, she had all the qualities we looked for. “I mean to win, Jimmy,” she insisted. Jimmy, with memories of two lost deposits, suspected that you couldn’t win by a mere act of will. Winnie was to strengthen the view that perhaps will-power counted for more than he allowed for.

So we came, Arthur Donaldson and I, to the eve of poll in Larkhall where it became clear just what strides our cause and our Party had made as Winnie had carried the colours. Arthur felt she might just be heading for victory. Arthur always had a good streak of optimism and I feared that it might be misleading him.

On the night of the poll, back home, listening with two old friends, we heard the victory announcement.

“Stop the world. Scotland wants to get on. “

Winnie gave us that defining text while much of the world, certainly Scotland, stopped, in amazement and in many cases elation. That text comes as near as any to a summary of our Party’s motives and aspirations. How well rounded is the story and how fitting it is that 360 years after the Earl of Seafield pronounced Scotland’s old Parliament dead the first words spoken in the new Parliament were Winnie’s “The Scottish Parliament, adjourned on 25th March 1707, is hereby re-convened”.