I was struck by a comment made by a fellow YES campaigner about her badge. She told me that she carries a few of them in her pocket so that when asked about where she got it or how nice it is, she can reply “here have mine.” She gives them her badge and off they toddle, pleased with her gift. Meanwhile, she dons one of her supplies and carries on her way. 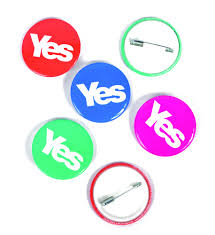 Then there was the time I was having a coffee in Stirling – a wee break before heading home. I noticed a young guy come in with a YES badge on. Then a moment later, a young woman and man came in and joined the YES badge wearer. They were all wearing YES badges. It had a strangely heart-warming feel to see such prominent support with young people, possibly students. A couple of minutes later, in walks with Colin Fox, SSP Leader, to join the YES badge-wearers and the penny drops – they have been canvassing this afternoon and this was their break too!

These little stories about how YES campaigners are ‘spreading the word’ with something as simple as a badge may not sound much but we can’t underestimate the power of symbolism on our lapels.

Walk down the street with a bright coloured YES badge and watch people’s reaction. Some smile back at you in a comradely gesture. I like that. The look of mutual satisfaction at recognising a fellow traveller, albeit a total stranger, on the journey to Independence is uplifting.

Then there is the inquisitive look of a passer-by as they realise what you are wearing. YES campaigners think everyone knows about our campaign and what it stands for. Yet, I find that lots of people: my students at university, taxi drivers, colleagues, neighbours and more, have a habit of asking me: “what does your badge mean? Is it to do with Independence?” Before you know it, we’re talking about Independence and the September referendum.

From something so simple as a badge, it does so much. Provides a visual identity to you and others. A prompt to engage and start a discussion. A cheap promotional tool with a rich history.

Willie Haines even created a Facebook page “Wear Your “YES Scotland” Badge Day”. That was for 25 January and Burns Day. But my view is every day is YES Badge Day. So ask yourself this, do you wear a YES badge at every opportunity? I know it isn’t always possible. It’s not acceptable in certain work situations. But every other time it is. Let’s really bring it home to everyone that half the voters are already up for saying YES and wear our badge with pride. People love to feel part of a movement and the more comfortable it is to wear a badge in public, the more it will galvanise our grassroots campaign. Just say YES.

Jimmy Halliday – one unique human being

The Second World War was in its final stages when Jimmy Halliday and I were going up as students to one of the top Scottish universities in order to equip us to become learned and prosperous.

When we met and began a life-long friendship I didn’t know anything about his political commitment, – or the lack of my own for that matter.  (My father, a Co-op manager, was teaching me over the breakfast table about Christian Socialism; in due course as the school’s mock election far-left candidate I came a close second to the Tory, while there was in those ignorant times no Scottish Nationalist opponent).

While enjoying the Glasgow Men’s Union lunchtime pies together, I remember that we indulged in no discussions about politics, preferring to compare our opinions of the fairer sex in the Ordinary Classes.  I had no inkling of the eminent heights my new friend would rise to when in later life he would become one of Scotland’s leading Nationalist gurus. At that time I knew him only as an erudite and witty brilliant debater an after-dinner speaker.

Years later when as the University’s SRC secretary I met and occasionally worked with Dr John MacCormick, I was unaware of the Lord Rector’s personal Scottish Nationalist involvement which was never of course on our agenda.  Nor was I aware that the budding leader of the SNP, one James Halliday, was a “fundamentalist” who regarded Dr MacCormick’s “gradualist” tendencies with some suspicion.

Perhaps as a political diversion young Halliday managed to lasso the (second) most charming of the Ordinary Class students and set up house with her as part of a legal arrangement still at that time known as marriage.

The he set about invigorating the embryo SNP.  At one time he convened the election committee responsible for the recruitment, training and monitoring of Parliamentary candidates, and as a political colleague Jimmy was a source of inspiration for us all, with a historian’s ability to inform, analyse and give mature advice. My own young wife often treated him mercilessly as an alternative Google, asking him about Scottish or English anecdotage, Cherokee mating habits, significant historical events, the Cheeky Forty of Greenock, contemporaries’ private lives, the future forecast of the independence struggle, and a myriad other topics, to which he responded with infinite courtesy and patience.

For me, he was prepared to enjoy discussing the absurd and the bizarre, especially in relation to politics – whether over the telephone or the dinner table. I knew the late Swedish Prime Minister for a while and both Olaf Palme’s and James Halliday’s personalities and intellects have regularly fused in my mind subsequently.

Jim Halliday was one unique human being whom it was my great privilege to have known and admired.