This is not a heart and flowers appeal from the Flag – this is about Tory Prime Minister David Cameron urging the peoples of England, Northern Ireland and Wales to get on the phone, or the Internet  or even Interflora to tell the Scots they are universally loved and cherished, at their own expense of course. Reminds me of the American millionaire who had a Chinese cook.  One night after a dinner with some friends he wished to impress, he summoned his cook and told him he would double his wages .  The cook was somewhat surprised so asked his employer why he was doing that;  the response was because he was such a wonderful cook.  The Chinaman pondered for a minute then replied “You been cheating me a long bloody time”.

So the heartfelt plea to get people to call and tell us they love us wears a bit thin, but to give them their due, the other nations have not been cheating us, just Westminster Government;  the other peoples have to suffer them too!  And do note Mr Cameron’s words were not aimed at the Scots, we know a poser when we see one.  I suspect the other peoples could share that view.

Note underneath what is the small print on the Valentine card;  all part of the Better Together service.

The plague of poisoned puddocks

What a load of really nasty things are heading this way for an Independent Scotland.  We will not be able to use the pound so our money will be worthless; hints from Bank of England Governor Mark Carney that he was not ruling out a sterling zone were brutally booted out of sight when millionaire Chancellor, George Osborne (perhaps I should have said “millionaires’Chancellor) said a currency union was not on. 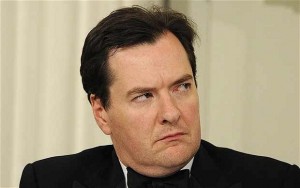 The timing looked odd, but maybe the opinion polls are moving to Yes , and another fleg would do no harm!  The vast wealth generated by oil which is at present squandered by Westminster, will suddenly become a massive problem for an independent Scotland.  The European Union will disown us and we will be cast into the outer darkness;  our friends and relatives everywhere in the world will turn on us and castigate us for escaping the benevolent dictatorship of user friendly Westminster.  We will become defenceless (ignoring the fact that twice Russian Battle Fleets have approached out shores and been discovered by social media with the MoD all of a twitter)and face hordes of immigrants, evil ones, who will swarm all over this land and our seas will be swept clean of fish.  England will invade, as they threatened in 1707, and take possession of Faslane and Coulport to keep the wonderful peaceful weapons of mass destruction – paid for by oil money, and for sheer spite England will turn off all their lights and leave our power generators churning out …….what?

And lo, none of this will happen;  once the Scots vote Yes there will be a complete transformation.  We will be the good guys – and dolls- again.

Our maritime defences are not safe in Westminster’s hands.

Defence has always been one of the hardest and most emotional issues for us in the Independence debate and it was a wonderful surprise when it was largely nullified, if not turned to our advantage this Christmas. The fact that it was General Sir Nicholas Houghton who played Santa was a bonus!

Who he, I hear you ask? Well he is the UK’s Chief of Defence Staff and Sir Nicholas has warned that the UK’s Armed Forces are at risk of becoming a “hollow force”.

In doing so he demonstrated why the defence of Scotland and in particular our maritime defences are not safe in Westminster’s hands. Sir Nicholas’ point was that it is all very well having the best equipment but a capable force also needs the trained personnel to operate it.

What is a “hollow force”? It’s a term used to describe a service which has excellent equipment, but does not have the manpower or the training to actually use that equipment.

Delivering his first annual Christmas address to the Royal United Services Institute, General Sir Nicholas Houghton said the Royal Navy would not be able to take any more cuts describing the Navy as being “perilously close to its critical mass in manpower terms”.

Sir Nicholas said the current £34 billion defence budget had been increasingly spent “on large capital equipment programmes often with an eye on supporting the United Kingdom’s defence industrial base.”

While “exquisite technology” had been protected in budgets, manpower had been “seen more as an overhead and activity levels have been squeezed”, he said and he warned that there was a “dawning reality” that rising manpower costs “raise the prospect of further manpower and activity cuts”, if budgets fail to grow. “Unattended our current course leads to a strategically incoherent force structure: exquisite equipment, but insufficient resources to man that equipment or train on it. “This is what the Americans call the spectre of the hollow-force,” he said.

Why is this important and is it relevant to the Independence debate?

Many have cited defence as one of the areas they worry about in the referendum debate. It’s as if the “death by a thousand cuts” policy which was exacerbated by the last Strategic Defence Review had never happened. That thousands of P45s were never sent out and we might even have an aircraft carrier which could carry aircraft in service.

Defence is a very emotional issue, just witness the reactions when BAE announced the reduction in their workforce by 1775 in total with Portsmouth losing 940 jobs by the second half of 2014, reducing the 1,200 workforce to just 260. A further 835 lost at Scotstoun, Govan, Rosyth, and Filton, near Bristol.

With the cuts in manpower being driven forward, the capacity to defend the UK, far less act the role of global policeman, is now in serious doubt. Coalition cuts have seen the defence budget drop by eight per cent over the past three years and the overall spend on the military drop by about £10 billion.

We hear a steady refrain from our opponents about how Scots in the Forces might choose to stay with the MoD’s caring and compassionate attitude to them. How it is perhaps better to go and risk your life in an illegal war knowing that your redundancy notice might be waiting for you in the next post. There will be loads of shiny equipment but with no personnel, which in turn means that no one is trained to use it.

It’s worth recalling that the 2012 Defence Resolution put some meat on the bones of the Scottish Defence Force and committed the Party to an annual defence and security budget of £2.5bn,

The Scottish armed forces will comprise:

We do need to have a fleet which is equipped to defend our fishermen, our coast from drug and people smugglers etc and of course to patrol and defend the Scottish sector of the North Sea. In the future we will also need to protect our installations in the Western Approaches as the technology develops to allow the oil in the Atlantic to be recovered.

It is becoming increasingly obvious that military service is being rewarded with P45s rather than a continuing career and that Scotland’s defence is no longer safe at Westminster.

Why on earth would we have a problem recruiting and retaining personnel? Certainly it can be argued that we would never be among the “elite forces”  nor would we have the “most cutting edge” technology, but our forces personnel would not get their redundancy notice after returning from theatres of war and the would have a secure future defending their own country. For most, that’s a far better package than is on offer just now!

From the front page of the February Scots Independent.

All too often, individual achievements are not fully known until after death. So it was with Jimmy Halliday who as Chairman of the Scots Independent was to be found faithfully at the paper’s Conference stall, urbane, jovial and acerbic – sometimes all at the same time. For those who were friends, he was excellent company. For those who read his articles or his books, it was with wonder at his shrewd analysis, his eloquent writing or his exquisite turn of phrase. My all time favourite was his denunciation at an SNP Conference of the “invincible ignorance of the Scottish people”. What a juxta-position!

Son of an estate gardener, Jimmy Halliday won a bursary to Glasgow University in 1944, (when he and another examinee realised they were the only two who had not attended a private school). Prepared to join the Navy because he believed the War was just, the bursary win gave him automatic deferment from war-time service. No sooner had he begun his studies than he was confined to bed for over 2 years with spinal tuberculosis.

On his return in 1947 he resumed his membership of Glasgow University Scottish Nationalist Association and rose to being a principal front bench speaker in the legendary Union debates of the time. In 1950, he was selected as debater of the year, a signal honour..

Jimmy Halliday was a life-long nationalist. He joined the SNP when he reached the eligible age of 16. And it was here that his major contribution to the SNP commenced but was not fully realised for his service predated the expansion of the SNP yet provided a stable platform for it.

Newly employed as a teacher he was persuaded to be SNP candidate in the Stirling Burghs constituency in the 1955 general election, later to discover that without his intervention, the other candidate, Dr. Robert McIntyre had refused to stand without a colleague. And in 1956, he agreed reluctantly to take over as Party Chairman (leader) at the age of 28 – a record that, not surprisingly, has never been surpassed.  Following a damaging secession, ill-feeling amongst remaining Party members was rife. It fell to Jimmy Halliday to stabilise the SNP while having a family and developing a career – no small sacrifice and at no reward. A sign of his success was that the SNP fielded 5 candidates in the 1959. Thereafter the growth of the Party is history.

Jimmy was Convener of the Election Committee, Vice President and an influential member of the NEC. As Chairman of the Scots Independent, and with a backbone of steel, he saved it on several occasions from being swallowed up by the NEC amidst outbreaks of partisan rivalry.

All this was accomplished while being an author and a senior lecturer in modern history who inspired generations of students. As his family highlighted, he was a great family man. Jimmy Halliday was survived by his wife, Olive, two children and two grandchildren. His wisdom, wit and humanity will be missed.