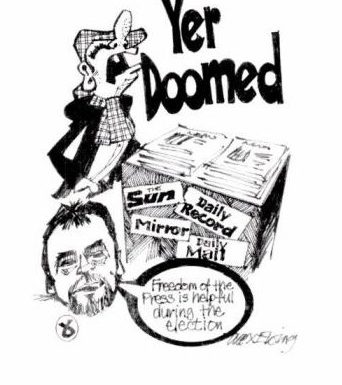 As I completed last month’s Flag I said something like there are going to be European Elections, I’ll have to get out my SNP poster – and lo, it came to pass.

The SNP decisively won the European Election, and took 3 of Scotland’s 6 seats, our best ever performance;  I am very pleased to see Christian Allard, who had been an MSP but got squeezed out in a gender balanced selection, to my recollection.

I was also more than pleased at the election of Aileen MacLeod. I first met her at a General Election in Ochils Constituency in 1999, I think, Annabelle Ewing was the candidate.  Anyway I was out leafletting around Alloa when this young couple got sent down from the HQ to help me. The young man was Mungo Bovey, whom I knew vaguely, but I had never met the young lady before;  the next day she appeared again, on her own and I asked her “Where’s Mungo today?”  She said “Who?”, and it transpired she had never seen him before!  She was elected in 2011, and became a Minister.  In 2016 we had a vast influx after the Referendum and she lost out; in 2017 when Edinburgh West needed a replacement for Michelle Thomson I thought she would be ideal, but I heard that she had been ill. Glad to see she has recovered.

Alyn Smyth was elected President of the EFA – European Free Alliance, a position formerly held by Ian Hudghton MEP, who has now retired.  The dynamics of Europe have now changed and the EFA will have a bit more clout, very likely a lot more than the UK in the interim while they are there.

In the European Elections there were 32 authorities and the SNP came first in 30 of them, the other 2 being Orkney and Shetland, which were Liberal.  This outcome had the newspapers resurrecting the Yellow Map which the Scots Independent created in the Scottish Election in 2011, where the SNP won 69 List seats, but was only allocated 16 as we had won 53 Constituency seats.

In the General Election of 2015 we resurrected the Map, as we won 56 out of 59 Westminster, a result beyond our wildest dreams – I remember watching the results on TV as they came in, and my wife saying “This is just a dream, we are going to wake up in the  morning and find out it didn’t happen!”.

Unfortunately, Prime Minister Theresa May went for walk in the Welsh Hills and decided she needed a bigger majority, so we had an unscheduled Election;  SNP MPs did not have time for their  group to bed in, so we lost 21 seats.  Mrs May finished up with a smaller majority and had to go with our cap in hand to the Democratic Unionist Party of Northern Ireland, forking out over a billion of our cash as a bribe.  Mrs May learned only a five word sentence during her reign – “Now is not the time” and she did not get our money’s worth either.  What an unmitigated disaster!

To vote or not to Vote?

A bit of controversy in The National over voting for other parties.  I remember, many years ago, when during the local elections in the constituency I live in, the SNP did not have a candidate – it happened very frequently my friends – it was a different political world.  Anyway I carefully considered how best to use my vote tactically.  I do not remember for whom I decided to vote, but on the day I went in to the polling booth determined to do this;  I went in, wrote SNP on the ballot paper, as I could not face voting for a Unionist – it was instinctive.

Also during the Scottish Government Election of 2016, I was very unhappy at how the Constituency had deselected our sitting SNP MSP, but I just gritted my teeth and voted SNP, as I was incapable of doing anything else, and by the way, we lost the seat and our majority in the Scottish Parliament.  If you doubt this we are only 1 seat short of a majority, that 1 seat, which went to the Liberals, would have been SNP’s.

However, in the stramash about someone claiming to be an SNP activist showing their support for independence by voting against it strikes me as very strange reasoning.  There were oodles of words but I never read them, having more important things to do – like sleeping in the chair.

Very pleased to see that we are to start planning the future government of Scotland;   as anticipated we see the weeping and wailing and gnashing of teeth from the Unionist side.  They are filled with self righteous indignation, as this wee Scotland starts to make plans to run big Scotland.  There is no doubt in my mind that they will fight us to the last gasp;  they have no alternative strategy but to come up with the dated and outmoded “Mother of Parliaments” which is floundering and sees no clear way ahead.  They say that once upon a time we could rely on calm measured and principled policies emanating from Westminster – that time, if it ever existed, is long gone.  We now see the two main parties riven by personal rivalries, and the once third party, the Liberals, starting to wake up after the Brexit vote.  I say starting to wake up, but South of the Border only with a wee boost in Orkney and Shetland.  It is my assessment that that they owe most of their current progress to Vince Cable, a former Glasgow Labour Councillor, who saw a better chance in England, until Nick Clegg exchanged his principles for a Ministerial car.  The possible election of Jo Swinson as their leader puts them back in dubious territory.

There was an All Under One Banner March in Galashiels last Saturday and a new and unwelcome entry into the political scene; nails were strewn across the road where the Bikers for Independence were riding. This is not political, this is criminal; the bikers rode in in a disciplined fashion, not too close together for safety’s sake.  Burst tyres can lead to crashes and there was danger to life and limb;  I understand there were seven bikes damaged.  This is an alienation of democracy, and the perpetrators deserve jail sentences, and also the loss of their driving licences.  I have no doubt that the police will know who they are, but probably do not have the proof.

This kind of action mirrors the scenes in Glasgow where Union Jack wavers disrupted the march there.

In my boyhood all of our holidays were spent with relatives and I vividly recall staying in the Miners’ Rows in Cowdenbeath with my aunt, two rooms with no inside toilet, and one room riddled with damp.  We stayed in a three roomed house with bathroom and kitchen in Dundee, so Cowdenbeath was an adventure. We would leave the house, get the No 3 bus down to the town and get the ferry, the Fifie, to Newport. Once there we got a bus to Lochgelly, a long and dreary trip as there was a blackout;  in Lochgelly we got another bus to Cowdenbeath – it seemed like ages.

We also stayed with one of my mother’s cousin in Carfin;  they had a council house  with three bedrooms and a kitchen and bathroom.  The journey then was bus Dundee to Perth, bus Perth to Stirling, bus Stirling to Glasgow, then a bus to Motherwell, and a last bus to Newarthill.

This is not a nostalgic happy memory; my memory of Carfin was of long lines of Army lorries, armoured cars, jeeps and tanks on trailers.  We children watched out of the window, clapping and cheering, and shouting inanities “How’s Jeannie?” and such like.  It was some years after that we realised this was the build up to D Day, and that many of the soldiers would not come back; I would have been 9 years old at the time 75 years ago!

This was prompted by the 65th Anniversary of D Day and the State Visit of the US President, Donald Trump.  This has attracted widespread protests, and one Unionist contributor has reminded us how many American troops took part in the Second World War.  There is no doubt that we would not have won that war without American aid;  however America did not enter the War until the Japanese bombed Pearl Harbour.  It has been said that Churchill knew about the attack but did not warn the Americans because he believed it to be the only way America would become involved.

So, Donald Trump is the American President, but he wants his writ to run in the UK too, so we need to be wary of any offers he makes.  “Timeo Danae et donae ferentes” – I fear the Greeks even when they bring gifts, as the Trojans found out to their cost.