Greetings to all readers, with a nice wee picture from Shetland, probably half way to Santa’s home in Greenland or Lapland, or wherever he doesn’t live.

Been reading this morning about criticism of a Minister who has been attempting to re translate the New Testament and generally getting pelters.  There is no doubt that Christmas has been commercialised to the Nth degree and there are many misconceptions.  For instance we sing about “sleigh bells in the snow”  – a line from one of the most famous songs we all know about Christmas, but I’ve never heard a sleigh bell in my life, they must have been rationed n my youth in Dundee, or just gone out of fashion.

However I don’t see the secularists attacking Santa, who definitely did not exist. The Minister concerned was not a secularist, just someone looking for reality.  We cannot rationalise faith.

The Nativity debate reminds me of the tale, no doubt apocryphal, of the old  Calvinist Scotswoman who abhorred alcohol.  When reminded that Jesus had turned water into wine, she snapped “ Aye and I dinna think ony the mair o’ him for that”.

‘The Kings frae the East’

There were three kings cam’ frae the east;

They spiered in ilka clachan:

“O, which is the way to Bethlehem,

O neither young nor auld could tell;

They trailed till their feet were weary.

They followed a bonny gowden starn

That shone in the lift sae cheery.

Whaur the stable gear was hingin’;

The kings begoud their singin’.

Sir Alexander Gray (though a Liberal also a very good poet) wrote ‘Scotland’ which Billy Wolfe and I reckoned our best national anthem. It ends:

For this is my country,

The land that begat me.

And these windy spaces

Are surely my own.

And the folk who toil there

In the sweat of their faces,

Are flesh of my flesh

And bone of my bone.

He also wrote ‘The Socialist Tradition from Moses to Lenin’ and is therefore A GOOD GUY!

I was reading the Sunday Herald this week, and was puzzled at my feelings of disappointment.  It took a wee while for the penny to drop;  I looked forward avidly for Ian Bell’s column, and it was not there, because he had died.

In 2012, we presented him with the Oliver Brown Award, which is for the person whom we felt had done most to advance the cause of Scotland’s self respect in the previous year.  Ian Bell was a more than worthy winner, and Scotland will sadly miss his eloquent and trenchant words as we progress towards Independence. 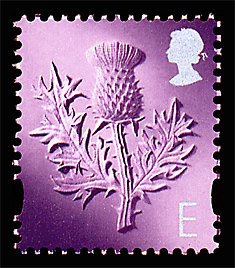 So the next day I took the bus uptown and queued at the main Post Office.  When my turn arrived they did not have any;  I asked when  they would be getting them in, nobody knew.  I asked how they got them and was told Royal Mail sent them.

I had to buy  stamps for the Christmas cards, and the following day I tried a post office at Carricknowe;  they had none and no way  of ordering, they just took what was sent.

I was not treated impolitely in any of the post offices, but felt a foreigner.

Also in the Sunday Herald this week was a report on the contamination of shellfish from Port Appin, 160 kilometres from Sellafield in Cumbria – the nuclear facility previously known as Windscale.

Back in the early Eighties, I was delivering SIs when I got into conversation with one of our readers, not far from where I live.  He had a caravan, as did I, and he told me he had not long returned from Argyll;  he was at a site quite near to a seaweed processing plant at Barcaldine, and the seaweed processed had come from Tasmania.

(I know it was the early Eighties because the SI Editor was Colin Bell, who went to the BBC in 1986).  The reason for the importation of seaweed to the West Coast was because the West Coast seaweed was contaminated by Sellafield waste dumped into the sea , some 200 miles away.

I told this tale to Colin, and he researched it and put the story on the front page of the Scots Independent.  It was a real scoop and the story was picked up by most of the Scottish dailies – we were chuffed.

Whether the seaweed processing plant is still in existence I do not know, but it is disturbing that this contamination is still ongoing.

Talking of delivering SIs, it sometimes landed one in awkward situations;  I was delivering one to a former ballerina, one of our Branch members.  She had company and I was invited in to meet them.  All went well until I made a complimentary remark about Rudolf Nuryev, the only male ballet dancer I had ever heard of.  They left him without a name and I was sitting there – how do I get out of here!

You miss the old days, sometimes.

Not a real land, but an imaginary one,  for people like Kezia Dugdale, David Mundell, Willie Rennie and their like.

Mr Mundell has been bleating like a frightened rabbit (if one can imagine one) about taxation powers for Scotland, so that we could increase taxes and do the things needing done with all the extra cash this would produce.  He is quite unaware, I charitably believe, that Scotland gets a block grant, which John Swinney allocates over many departments, and they all want more.  The money raised from Income Tax will be deducted from the block grant, or then we would have it twice, but the amount available for John Swinney  to allocate remains the same.  Go figure.

Kezia Dugdale wants more money spent on her hobbyhorses, but steadfastly ignores saying where it would come from – that’s John Swinney’s problem. Maybe she believes there is a money tree, but I prefer to believe she promises what she cannot perform purely to say “SNP Baad”.  Another bleater

Also the proposed method of raising tax rates is questionable.  If one tax band is increased by an extra 10p, so we can soak the super rich, then every tax band must be increased by 10p, meaning the lowest earners pay proportionately more.  Verily indeed, the Treasury, a polite name for the Tories is very much an Indian giver.

And of course, Income Tax is the least popular tax – everyone wants more money spent, but is reluctant to pay more tax.  Chicken and egg situation.

Can’t think of anything festive to say about Willie Rennie, but the news about the Forth Road Bridge re-opening jogged my memory;  the biggest impression he made on me was during the Dunfermline Westminster by election;  there was Willie sounding off about abolishing tolls on the Forth Road Bridge, while the Holyrood Minister of Transport  was opening new tollbooths.  The Transport Minister was Tavish Scott, Liberal MSP for Shetland.

Items mentioned are from the Herald, not that I have a down on it as I only read it and the National.  Life is too short to consider the Scotsman

Saturday past, there was a headline roughly “Snooker player loses licence for drink driving” – together with a large photograph of Stephen Hendry.  On reading the report the player who lost his licence was a friend of Stephen Hendry’s son.

Just today there was a piece headlined – again roughly “ MP critical of Osborne’s plans” with a picture of David Mundell.   The story was about Alison Thewliss, an SNP MP and a former Flag Compiler – and she’s much more personable than the rabbit.

Methinks that instead of getting rid of editorial staff, as is rumoured, they should retrain their sub editors, or is  someone deliberately turning a blind eye?.