The expression “Those whom the Gods wish to destroy they first make mad” nearly always reminds me of the old joke;  “I had to take my dog to the vet to have him put down” to be asked  “Poor thing, was it mad?”  Response “Well it wisna very pleased”. It is difficult to know where to begin, as so many issues are cropping up with no answers, so a brief resume . I hear that the Daily Record this week criticised the Scottish Labour Leader for stating that Nicola Sturgeon was as divisive as Margaret Thatcher;  interesting that the Record took that line. A furore END_OF_DOCUMENT_TOKEN_TO_BE_REPLACED

In the week that it was reported that a customer received an email response from Marks and Spencer to a complaint about Scotch Whisky being branded as British, advising her that Scotland was now part of England, more and more instances surface of the unconscious view held by many south of the border that Scotland exists only as a dependency to its larger neighbour. After writing to voice her displeasure that Whisky produced in Scotland and therefore protected in law as being Scotch, was not afforded Scotland as its country of origin but was instead labelled as being British; the matter was further compounded by END_OF_DOCUMENT_TOKEN_TO_BE_REPLACED

Monday: what a bizarre day for political media management in 10 Downing Street. A Cabinet reshuffle that actually didn’t do very much but somehow managed to take hours to conclude. Maternal Theresa promised a new ministerial team of bright and bubbly women and BME as dynamic reformers. Instead she was left with no net increase in women in full Cabinet posts. She had to resort to the use of ‘attendees’ to make gender balance appear better. So poor Liz Truss (chief secretary to the Treasury) and Andrea Leadsom (Leader of the House of Commons) ‘attend’ Cabinet whereas their predecessors in these roles would have been END_OF_DOCUMENT_TOKEN_TO_BE_REPLACED

Please note that although you can continue to place orders with the online shop, the volunteer staff will be on holiday 6th to 15th January. All orders placed between 6th and 15th January 2018 will be posted out on Tuesday 16th January 2018 Happy shopping END_OF_DOCUMENT_TOKEN_TO_BE_REPLACED

I know that we were all just a wee tad busy in 2012 – 14, there was apparently a referendum going on. But while we were tramping the streets with leaflets, canvas packs and manning street stalls for that a seriously important anniversary went without due recognition. I know that the National Trust for Scotland held major events over the weekend of the Battle of Bannockburn (just as well the new boss man wasn’t in place) but because of co-ordinated political opposition the anniversary was much lower key than it deserved. Not just because the Scots under King Robert defeated the English under Edward 2 END_OF_DOCUMENT_TOKEN_TO_BE_REPLACED 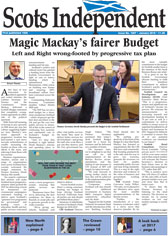 January 2018 digital issue is available now in the shop END_OF_DOCUMENT_TOKEN_TO_BE_REPLACED

Send a donation to the Scots Independent